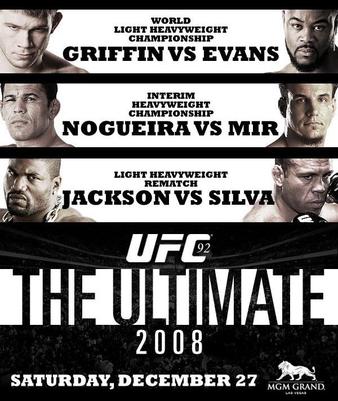 #34
Greatest Event of All Time

In a rare feat even for the world’s top MMA promotion, the UFC generated over 1 Million Pay Per View buys for the second consecutive event with UFC 92, which featured three of the most anticipated fights of the year: a Light Heavyweight Championship bout between Forrest Griffin and Rashad Evans; an Interim Heavyweight Championship bout between Frank Mir and Antonio Rodrigo Nogueira; and a grudge match between former Pride superstars Quinton “Rampage” Jackson and Wanderlei Silva.

Evans took the title from Griffin in what was the first-ever championship fight between two former TUF winners/contestants, Mir became the first man to finish Nogueira in a professional fight (though Nogueira was less than 100% heading into the bout), and Jackson took vengeance over Silva by knocking him out cold in the first round.

Watch this video interview with Frank Mir for his UFC 92 fight with Antontio Rodrigo Nogueira.