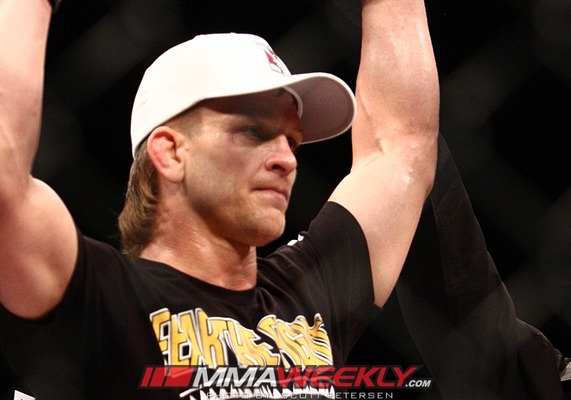 Mike Pyle is ineligible for regional rankings due to inactivity.
Fighters must have at least one completed MMA bout in the past two years to be ranked.

Mike Pyle is an American welterweight fighter currently signed to the UFC. He is a brown belt in Brazilain Jiu Jitsu and trains out of Syndicate MMA in Las Vegas, Nevada. Outside of fighting, Pyle has had small roles in Universal Soldier and Men In Black III. He has previously fought for M-1, Shooto, Sport Fight, Viking Fight, International Fight League, EliteXC, Strikeforce, Affliction, and World Extreme Cagefighting where he was the welterweight champion. He has notable wins over Jon Fitch,  Shonie Carter, Dan Hornbuckle, JJ Ambrose, Brian Gassaway, John Hathaway, Ricardo Almeida, Ricardo Funch, Josh Neer, James Head, and Rick Story. Of his twenty six wins, twenty two have been finishes including sixteen submissions. He has won the UFC "Knockout of the Night" bonus one time.

Quicksand is probably the most apt nickname that could have been bestowed upon UFC veteran Mike Pyle, as his submission skills, while not exceptionally slick or unorthodox, always seem to get the job done. His lengthy frame allows him to wrap up physically stronger fighters from the bottom position. Rumored from within the Xtreme Couture gym to be among the top fighters in the club, Pyle had long been unable to achieve any sort of break out success within the UFC, alternating wins and losses against mid-level competition. That all changed at UFC 120 when Pyle thoroughly outworked and defeated the then 14-0 undefeated John Hathaway. With the impressive and dynamic victory, Pyle delivered a rebuttal to the critics and oddsmakers who had put him as a +400 underdog coming into the contest.

Mike first became interested in MMA in the nineties when he first heard about the success that Royce Gracie had had in the early UFC. He had already been training in Tae Kwon Do for some time but he also started to go to as many Gracie family seminars as he could and set up a makeshift gym in a thirteen by fifteen foot shed. His first professional fight was in 1999 against future UFC and Pride champion, Quinton Jackson. Even though Jackson weighed 200 pounds for the bout which was scheduled at 175 pounds, Pyle fought him anyways. During the fight, he attempted numerous submission attempts but the larger Jackson repeatedly slammed him and at one point, he threw Mike out of the ring. Ultimately, he would lose a unanimous decision.

He did not fight again for two years, but for his second fight, Pyle took on future UFC star, Jon Fitch, and was able to submit him in the first round. Over the next three years, he was able to compile a 7-2-1 record. At WEC 17, he was given a shot at the vacant welterweight title. He was able to defeat Bret Bergmark by first round submission to win the belt. He would defend it one time, against Shonie Carter at WEC 28, and he would again win by first round decision. He would be stripped of the title after he left the WEC in order to fight for other promotions. In April, 2006, he debuted with the IFL riding an eight fight winning streak. He would be part Bas Rutten's Los Angeles Anaconda's in the IFL's team format. He would go 1-2 with the promotion over eight months.

In 2007, Mike would be take on Ross Ebanez on the preliminary card in EliteXC's debut event, EliteXC: Destiny. He would submit Ebanez in the first round. Following a one fight stint with Strikeforce where he picked up a unanimous decision win, he wold return to EliteXC for their third show where he would lose by submission to Jake Shields. After winning fights in Canada and Japan, he would take part in the inaugural event for Affliction where he would submit JJ Ambrose in the first round. Three months later, he would pick up another first round submission, marking the sixth victory of his last seven that had ended in a submission win for Mike.

In 2009, Pyle was picked up by the UFC. He made his debut against Brock Larson at UFC 98, but would lose by armbar in the first round. He would bonce back four months later with a submission of Chris Wilson, but he would be finished by TKO at the hands of Jake Ellenberger in early 2010. He would again bounce back with a submission, this time over Jesse Lennox at UFC 115. He was next matched up with highly touted, 14-0 John Hathaway. Despite being a four to one underdog going in, Pyle was able to grind out a decision victory over the Englishman in his home country. He was again able to come through as an underdog when he defeated Ricardo Almeida by decision in what ended up being Almeida's last fight. At UFC 133, he was matched up with rising star, Rory MacDonald, but he would lose by TKO in the first round.

After a mediocre 4-3 start to his UFC career, Mike began to string together more wins. He was originally scheduled to take on Paulo Thiago at UFC 142, but an injury forced his opponent off the card and he was replaced by Ricardo Funch who he was able to finish by TKO in less than a minute and a half. He would pick up a "Knockout of the Night" bonus when he defeated Josh Neer at UFC on FX 3. Another TKO victory over James Head at the TUF 16 Finale marked the first time in his career that he had won three straight fights by T/KO. At UFC 160, he took on Rick Story and would yet again win a decision when he was considered the underdog. This improved his overall UFC record to 8-3. He met Matt Brown at UFC Fight Night 26 in a highly anticipated fight that many thought would be a knock down, drag out brawl. Unfortunately for Pyle, he was knocked out in just twenty nine seconds by the surging Brown. He would take six months to again return to the octagon. He fought TJ Waldburger at UFC 170. Pyle was able to continually stuff his opponents takedowns and out strike him. With less than a minute left in the fight, he was able to drop Waldburger and finish him on the ground to pick up a TKO victory.