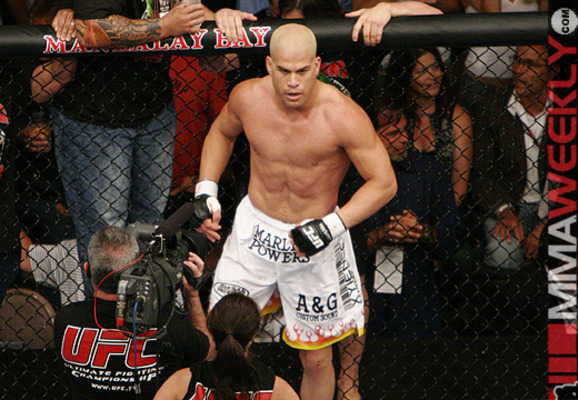 Tito Ortiz is ineligible for regional rankings due to inactivity.
Fighters must have at least one completed MMA bout in the past two years to be ranked.

"The Huntington Beach Bad Boy" Tito Ortiz is one of the most charismatic, recognizable, and polarizing fighters in the history of mixed martial arts. Though he has ably played the role of the heel for fans for much of his long fighting career, Ortiz is without question a trailblazer, a showman and an innovator who helped shape and define MMA's modern-day landscape. He was for many years the UFC's biggest star, and had he not been headlining for the promotion in some of its darkest moments, the odds are that it would have folded.

Ortiz debuted for the UFC in 1997 and eventually went on to become the second-ever UFC Light Heavyweight Champion, defeating “The Axe Murderer” Wanderlei Silva for that honor at UFC 25 in 2000. After taking the belt, Ortiz put together a string of title defenses against notable fighters such as Evan Tanner, Vladimir Matyushenko, and Ken Shamrock, establishing himself as one of the world’s best cagefighters and setting the record for most consecutive light heavyweight defenses (five) in the process.

Ortiz’s style in the cage is a blend of freestyle wrestling and vicious ground-and-pound. It is an easy to predict but hard to prevent approach to fighting that has gained him notable victories over Patrick Cote, Forrest Griffin, and Vitor Belfort, among others. Even with today’s technical advances by a new generation of MMA fighters, Ortiz remains one of the most effective fighters on the planet at declining to pass his opponents guard and raining down devastating elbows from the top position. Ortiz also won Bronze at the 2000 ADCC Championships, the worlds most prestigious submission wrestling tournament

Ortiz is one of the most vocal trash talkers in the sport and is responsible for some of MMA's most enduring rivalries. His two great antagonists were Ken Shamrock and Chuck Liddell. Ortiz owned Shamrock, beating him decisively in three separate bouts. But Liddell owned Ortiz, beating him just as decisively via TKOs in two high-profile title fights. But Ortiz's greatest rivalry of all may have come not with another cagefighter, but with UFC President Dana White. Former friends and business partners back when White managed Ortiz in his early fighting career, the two had fallen out and feuded bitterly and publicly for years. Often it was the fans who won out, as when the two came surprisingly close to signing up to box one another (White eventually thought better of it), or when Ortiz arrived at the weigh-in to his last fight under one particular UFC contract with a t-shirt reading "Dana White is my bitch."

After leaving the UFC for a time after dropping a Unanimous Decision to future champion Lyoto Machida in 2008, Ortiz returned to the organization in late 2009 after reconciling with White, determined to finish the remainder of his career with his original promotion. Plagued by chronic neck and back problems that have at times undermined his performances, Ortiz nevertheless fights on to this day, and remains a stern test for even the best fighters. Ortiz’s always-colorful personal life includes a longstanding and at times tumultuous relationship with the pornographic film star Jenna Jameson.

Ortiz would sign on to coach opposite Chuck Liddell however the two would never fight again as Ortiz had to pull out due to an injury. His return to the UFC wasn't a great run as he would drop 5 out of 6 picking up 1 win over Ryan Bader.

He would leave the organization and sign with Bellator handing Alexander Shlemenko his first loss since 2010. He is now set to face  Stephan Bonnar in the Main Event of Bellator 131

Interview  |  Tito Ortiz says, "All the Haters can Suck it" report dead link

Back in the day when the internet was free, Sherdog.com used to post highlight videos of the world's top fighters. They have long since been taken down, but survive on YouTube and other video hosting providers. This one features the "Huntington Beach Bad Boy" Tito Ortiz, once considered the top fighter on the planet.

MMA highlight video maker Machinemen takes us on a tour of Tito Ortiz's best moments in the UFC Octagon in this HL vid.