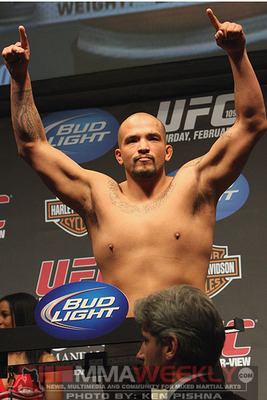 Joey Beltran is ineligible for regional rankings due to inactivity.
Fighters must have at least one completed MMA bout in the past two years to be ranked.

Joey Beltran is a striker and Brazillian Jui Jitsu blue belt. He is a veteran of Strikeforce, King of the Cage, Bellator, and the UFC. He has twice earned Fight of the Night honors in his UFC fights. Of his 14 wins, he has finished 12 of them with 11 knockouts. He has notable wins over Houston Alexander, Tim Hague, Rolles Gracie Jr. and Wes Combs.

Beltran began his career fighting in regional promotions around California. He was known for his knockout power and early stoppages which earned him a spot in the UFC. He debuted as a late replacement against Rolles Gracie Jr. and was able to defeat the grappler via TKO in the second round. Although he was a fan favorite due to his aggressive style, he would go 3-4 in the UFC and be released after a brutal knockout at the hands of a much larger Lavar Johnson.

Joey was quickly able to regroup after being released and dropped down to light heavyweight in another regional show. He said that he felt better at that weight and was able to pick up a victory. He was again called up by the UFC and filled in against James Te Huna. He would lose the fight by unanimous decision but the pair would pick up fight of the night honors. He next took on Igor Pokrajac in Australia. Although he initially won via unanimous decision, Beltran was later stripped of the win after testing positive for nandrolone. He was given a nine month suspension.

At UFC Fight Night 29, Beltran was hoping to get back to his winning ways when he took on fellow exciting striker, Fabio Maldonado. In a fight that did not live up to many peoples expectations, Beltran would lose a close, controversial decision. He was subsequently released from the UFC for a second time. He was quickly picked up by Bellator as a late replacement for an injured Tito Ortiz. He would take on Quinton Jackson at Bellator 108, but would be knocked out with one second left in the first round. This put his last ten fight record at 2-7 1 NC.