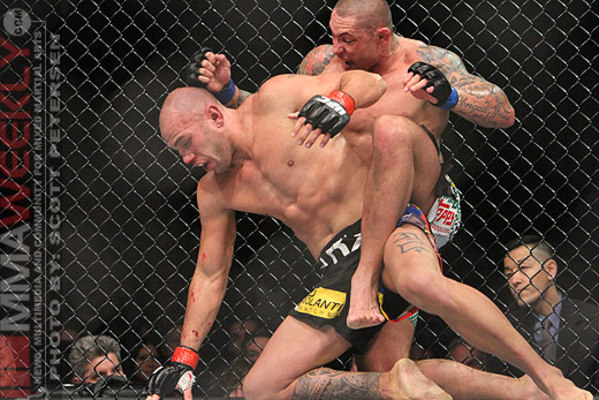 After compiling an impressive professional record of 9-0 with eight stoppages prior to his UFC debut in 2007, Thiago Silva had garnered a reputation as a fearless Brazilian striker from the streets of Sao Paulo. After defeating James Irvin, Tomasz Drwal, Houston Alexander and Antonio Mendes—all of them with punches—to start off his UFC career, many felt that the Brazilian slugger was destined to wear the belt. Unfortunately for Silva, Lyoto Machida halted those dreams with a first-round knockout at UFC 94 in January of 2009.  Prior to his loss to Machida, Silva had been undefeated in his thirteen fight career with twelve of his wins coming via stoppage and eleven having ended due to strikes. After that fight, Silva defeated Keith Jardine with a first-round knockout and fought tooth-and-nail with former champion Rashad Evans while suffering from a severe back injury to repair and revitalize his image in the eyes of his fans.

While his Brazilian Jiu-Jitsu black belt has rarely come into play in his pro career thus far, Silva’s striking ability, honed in the United States at the famed American Top Team gym in Coconut Creek, Florida, has lead him to stoppage victories in the vast majority of his wins. Combining his heavy hands with one of the most sinister staredowns in the sport, Silva figures to be a top contender at 205 and a solid fan draw for quite some time to come.

In January of 2011, Silva defeated Brandon Vera by Unanimous Decision, only to have the result changed to a No Contest several months later when his urine sample was flagged as an artificial substitute by the NSAC. Silva later admitted to using steroids and attempting to cheat his drug test and was subsequently fined, stripped of his fighting license and suspended from competition for one year.

Silva accepted his punishment and took full responsibility for his actions.  After being out of action for 15 months, Silva returned to the Octagon at UFC on FUEL TV 2 to face highly touted prospect Alexander Gustafsson. He would go on to lose the decision and would then face off against Stanislav Nedkov at UFC on FUEL TV 6 in November. Silva won the fight by submitting Nedkov in the third round however Silva would fail another drug test this time for marijuana metabolites thus changing the outcome of this fight to a No Contest as well.

Silva returned to the octagon again at UFC on FUEL TV 10 where he stopped Rafael Cavalcante via knockout at 4:29 of the first round. The knockout earned Silva Knockout of the Night honors as well as the Fight of the Night honors for his efforts. He next fought Matt Hamill at UFC Fight Night 29. Silva would miss weight for the fight, coming in at 208 pounds but this did not stop him from controlling much of the fight and coming very close to stopping the fight due to leg kicks. He would ultimately win a decision.

He was next scheduled to take on Ovince St. Preux at UFC Fight Night 35, but had to pull out due to injury. The fight was later rescheduled to UFC 171 two months later. However following reports of Thiago Silva being arrested for aggravated battery and resisting an officer he was released from the UFC with the UFC's president Dana White stating that Silva Silva will "never fight in the UFC again".

Despite originally being refused bail, Silva was finally allowed to post one and was released from custody. He was back to training in March 2014.