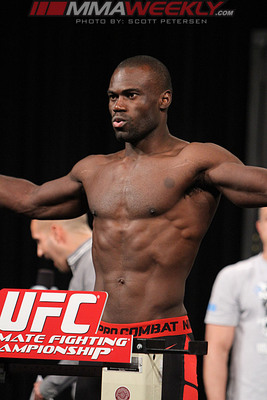 Fighting for a major organization has made Uriah Hall ineligible for regional rankings.

Uriah Hall was born in Jamaica but moved the New York when he was thirteen.  While in New York he began to be bullied so that is when he started in martial arts and he now holds a black belt in Tiger Schulmann's Mixed Martial Arts.  Hall would win his first 3 fights finishing all his opponents before facing Roger Carroll and winning the Ring Of Combat middleweight championship.  He would lose his next two fights in the promotion to current UFC fighters Chris Weidman and Costa Philippou.  He would win his next three fights for the promotion getting his belt back by defeating Nodar Kuduxashvili.  This would be his last fight for the promotion before joining the Ultimate Fighter.

Hall was a member of Team Sonnen on the 17th season of The Ultimate Fighter.  Hall won a UD over Andy Enz to earn his spot in the house.  Uriah's performance was good enough to make him the 3rd overall pick and 2nd pick of Team Sonnen.  In the 2nd episode Chael Sonnen selected Uriah Hall to fight Adam Cella in the opening round.  Hall would finish the fight in spectacular fashion with a spinning heel kick that put Cella to sleep.  Hall showed great character and was concerned for Cella's well being and was even apologizing to him for the kick.  Hall would also win $25k for the Knockout of the Season for that kick.

Hall would follow the win up with another first round finish when he took out Bubba McDaniel with another first round KO, earning himself a slot in the semi-finals where he will face off against Dylan Andrews who he would finish with another TKO victory, this time in the second round. He secured himself a spot in the final against fellow team member Kelvin Gastelum.  Hall was a favorite all season to win the show and would also be the favorite for this final match up.  However Gastelum would once again play spoiler as he was able to get the split decision victory to win the show.

Hall would then face UFC veteran Chris Leben at UFC 168 in what appeared to be a loser leaves the UFC fight.  He got the win when Leben was unable to come out for the second round giving Hall the first round TKO victory.  Hall would pick up another win at UFC 175 over Thiago Santos despite suffering a gruesome toe injury early in the fight.