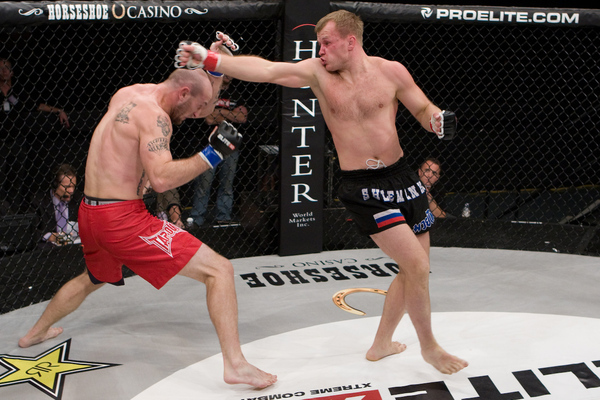 Alexander Pavlovich Shelemnko is a Russian mixed martial artist currently fighting in the middleweight division for Bellator Fighting Championships. Alexander is an expert in hand-to-hand combat & traditional kickboxing. He trains at the Saturn Profi (RusFighters) sports club in Omsk, Russia, and holds a degree in Physical Culture (specialization - Combat Sports Trainer) at the Omsk State University.

As a teenager, Alexander did skiing and Greco-Roman wrestling. At the age of 15, Shlemenko seriously started to train ARB, which is the Russian abbreviation for "army hand-to-hand combat". He competed in many regional and national tournaments in ARB, and got to the highest sport level by reaching the title of "master of sports". After watching a professional pankration tournament, Shlemenko immediately wanted to try it out. Shortly after that, he made his professional MMA debut in 2004 at the age of 20 in his hometown Omsk, winning by TKO.

During the early stage of his professional MMA career, Shlemenko competed in the IAFC (International Absolute Fighting Council). Sometimes fighting multiple times per night, Alexander won most of them by knockout, which can be seen in his record. In May 2005, after only one year of his professional MMA career, Shlemenko had an impressive 15-2 record, and was gaining more and more attention by the Russian fans and the media.

Shlemenko, after signing with Bellator, quickly made a splash, winning the Bellator Season 2 Middleweight Tournament earning a title shot against Bellator Middleweight Champion, Hector Lombard, which he lost by unanimous decision.

On February 7, 2013 at Bellator 88 Shlemenko won the title by knocking out Falcao in the second round. After arguably losing the first, Shlemenko came out in the second and hurt Falcao with body shots, eventually dropping him. Shlemenko finished him off with ground-and-pound, putting him unconscious and forcing the ref to stop the fight. Shlemenko would defend his Bellator title for the first time at Bellator 98 when he squared off against tournament winner Brett Cooper, he won by decision. He would then finish Doug Marshall in his next defense with a liver shot in the first round that dropped Marshall. He would follow that up with a third title defense against Brennan Ward at Bellator 114 submitting him in the second round with a guillotine choke.

Following that fight Shlemenko called out Tito Ortiz for a light heavyweight fight. Shlemenko got his wish when on May 17, 2013, he faced Ortiz at Bellator 120: Rampage vs. King Mo. Coming in as a heavy favourite (-440), over the aging and former UFC LHW Champion Ortiz, Shlemenko looked to keep his 13 fight win streak alive. Ortiz had other plans however, when he sank in a arm-trianlge choke, which forced Shlemenko to tap, at 2:27 in Round 1.

Hoping to bounce back from the devastating loss to Ortiz, Shlemenko faced Brandon Halsey for his fourth Bellator Middleweight title defence at Bellator 126: Shlemenko vs. Halsey. Shlemenko would quickly lose his title to Halsey, when Shlemenko tapped due to a triangle choke, at 0:27 in Round 1.

After two disappointing losses, Schlemenko went back to his home country of Russia to fight in the Fight Nights: Battle 18 - Before the Frost. There he faced Swish fighter, Yasubey Enomoto. Even with a lackluster showing, Schlemenko walked away with a Decision victory (UD) and got back into the win column.

Schlemenko then went back to Bellator to headline a card with Melvin Manhoef - Bellator 133: Shlemenko vs. Manhoef. In a entertaining fight that finished in Round 2 with Schlemenko landing a destructive spinning elbow to Manhoef that knocked him out cold. Referee John McCarthy quickly ended the bout at 1:25.

Roughly a month after Bellator 133, it was announced that Schlemenko had failed a drug test and was suspended indefinitely, until a hearing could be held. On June 23, 2015, it was announced; in a 7-0 vote, that the California State Athletic Commission (CSAC), would suspend Schlemenko for three years, fine him $10,000USD and overturn his knockout victory over Manhoef to a No Contest. Steroid oxandrolone and oxandrolone metabolites as well as a testosterone-to-epitestosterone (T/E) ratio of 50-1, was found in Shlemenko’s post-fight urine test (the commission’s limit is 4-1).

Schlemenko maintains his innocence, stating, "I am not guilty of taking any performance enhancing drugs, and because of these accusations, I have suffered immeasurable damage to my career and my reputation."