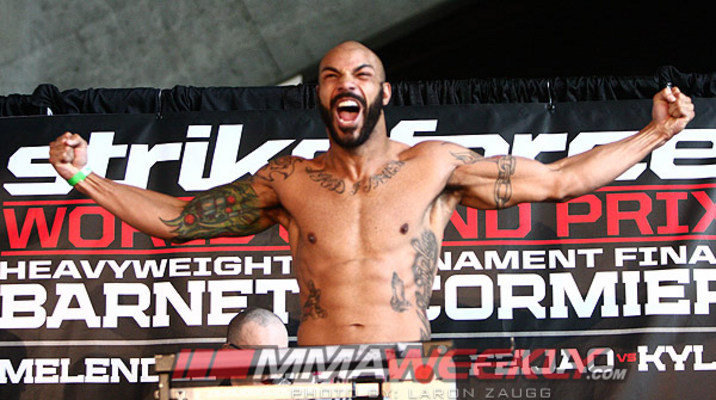 Mike Kyle is ineligible for regional rankings due to inactivity.
Fighters must have at least one completed MMA bout in the past two years to be ranked.

Mike Kyle is a veteran of many prominent MMA promotions including WEC, UFC, Pancrase, King of the Cage and Steikeforce. He fights out of American Kickboxing Academy in San Jose, California. He is the current Light Heavyweight Champion in King of the Cage. He holds notable wins over Wes Sims, James Irvin, Tsuyoshi Kahsaka, Rafael Cavalcante and Tony Lopez. Throughout his career, he has bounced between the Heavyweight and Light Heavyweight divisions.

He has been involved in numerous strange happenings during fights. Wes Sims claimed that he bit him during their fight. Although a bite mark was visible on Sims' chest, Kyle declined any wrongdoing. His fight with Krzysztof Soszynski was declared a draw after Soszynski received a thumb to the eye. He was suspended after being disqualified from his fight with Brian Olden due to illegal strikes to the back of he head. His fight with Travis Wiuff was deares a No Contest due to the Tko strike from Kyle landing after the bell. His latest fight with Rafael Cavalcante was ruled a No Contest after Cavalcante tested positive for steroids after the fight. He has also been scheduled to fight Gegard Mousasi four times with one or the other withdrawing th first three times for various reasons. The two would eventually meet and Kyle would lose by submission.

His first big break would come when he was signed by the UFC in 2004. Although he went 2-1 in the promotion, with all fights ending by first round knockouts, he was released for unknown reasons. He next went to Pancrase where he defeated Japanese legend, Tsuyoshi Kohsaka by flying knee. His next four fights alternated between WEC and Strikeforce, where he went 0-3-1. For the next two years, he would bounce between regional shows, King of the Cage and Strikeforce before finding a permenant home in Strikeforce. He was scheduled to fight on the promotions final card against Gegard Mousasi. He was finished late in the first round by rear naked choke.Kyle is next set to fight Travis Wiuff in a rematch of their 2010 no contest.