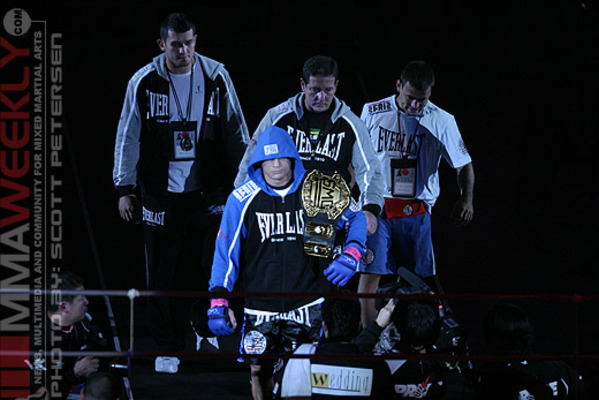 Denis Kang is ineligible for regional rankings due to inactivity.
Fighters must have at least one completed MMA bout in the past two years to be ranked.

Denis Kang bears an unusual pedigree in the MMA world. Born in the French overseas colony of Saint Pierre and Miquelon to a Korean father and a French mother, he and his family relocated to the Canary Islands in 1988.

Beginning his fighting career in 1998, Kang struggled to put together a solid winning streak in his first few years of active competition, compiling a 7-7 record as of 2003. He then suddenly, and unexpectedly, embarked on the biggest winning streak of his career from 2003-2006, going unbeaten for a remarkable 23 straight fights, and catapulting into the top echelons of the sport. During his run in Spirit MC and Pride Fighting Championships, Kang defeated notables such as Andrei Semenov, Mark Weir, Murilo Rua, and Akihiro Gono before joining the UFC in 2009. Kang went 1-2 in his UFC run and was cut after a TKO loss to British fighter Michael Bisping in 2009.

2010 saw Kang pick up a win over Dae Won Kim at W-1: Judgement Day, KAng defeating his opponent via arm-triangle choke. KAng would draw with Paulo Filho on July 18, 2010, at Impact FC 2.

2011 would mark a significant deterioration of Kang's MMA career as he would go 1-3 for the year. Things would start off well with Kang emerging victorious over Eun Soo Lee at Road FC 2: Alive on April 16, 2011. Things would take a dramatic turn for the worse after this, however. Kang would drop a fight to Jesse Taylor, losing via rear-naked choke at Battlefield Fight League 8: Island Beatdown. His second defeat would come at the hands of Seung Bae Whi at Road FC 3: Explosion. Kang would lose via TKO. Kang's third straight defeat would soon follow, as he was beaten by Shungo Oyama via TKO at Road FC 5: Night of Champions.

Kang would manage to snap his three losing streak by besting Hae Suk Son via KO at Road FC 8: Bitter Rivals. It was Kang's first victory via stoppage in almost two years.


Kang's last professional fight was against the powerful knockout artist Melvin Manhoef at DREAM 18 on December 31, 2012. Kang would blown out in the fight as Manhoef would defeat him in only fifty seconds of the first round.
Kang would later confirm via his official Twitter account that he had retired from active competition and would be focusing on coaching only.

Although he rarely takes his fights to decisions, and is known for his well-rounded striking and submission skills, Kang has been criticized for inconsistency when facing top competition, often losing fights he was winning after getting caught in tight submission holds or being overwhelmed with strikes. Kang has nevertheless proven himself capable of beating any fighter in the world on a given night.