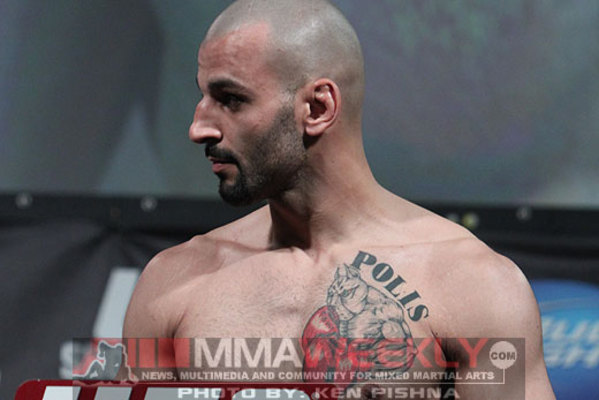 Costas Philippou is ineligible for regional rankings due to inactivity.
Fighters must have at least one completed MMA bout in the past two years to be ranked.

Constantinos ''Costas'' Philippou began training boxing back in 1994 and would move to the United States and within two months he competed for the Golden Gloves. He made it to the finals at Madison Square Garden but would lose by split decision. He turned professional and would win 3 boxing fights before differences between his coach and manager led him to retire from boxing. He instead would start training MMA falling in love with it. He made his MMA debut against fellow future UFC fighter Ricardo Romero, losing via split decison. He went to win his next five fights before being selected as a contestant on The Ultimate Fighter: Team Liddell vs. Team Ortiz. He would lose in the elimination round to Joseph Henle via submission.

Costas would receive a second chance and faced Nick Catone in his UFC debut at UFC 128 as a late replacement for Dan Miller. He went on to lose a unanimous decision but the UFC kept him around. After earning his first UFC win with a split decision over Jorge Rivera, Philippou went on to win his next three fights with victories over Jared Hamman, Court McGee and Riki Fukuda. He next took on Tim Boetsch at UFC 155 in a battle for a top spot in the middleweight division. In a back and forth battle, Costas was able to finish a badly battered Boetsch by TKO near the end of the last round. Costas was then supposed to welcome Strikeforce veteran and former champion Ronaldo Souza to the UFC at UFC on FX 8 but would have to withdraw from the bout following an injury during training.

His next fight instead would be against Francis Carmont and he would be out grappled for 3 rounds losing the decision. Looking to rebound, Philippou fought former Strikeforce Middleweight Champion, Luke Rockhold, at UFC Fight Night 35 in the main event. Rockhold hit Philippou with several vicious body kicks in the first round en route to a TKO victory, giving Philippou the first stoppage loss of his MMA career.

He would re-enter the winner's circle in his next bout against Lorenz "The Monsoon" Larkin, Philippou stopped Larkin in the 1st round with a stunning knockout victory. He is now scheduled to square off against the former TUF competitor Uriah Hall on UFC Fight Night 59: Mcgregor vs Siver.

Episode 1 Joseph Henle def. Philippou by Armbar at 2:17 of Round 2