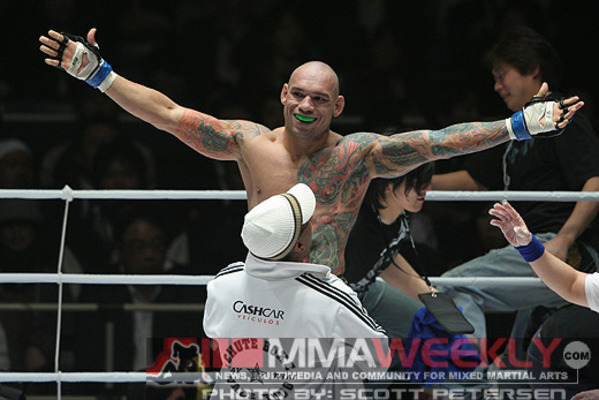 Evangelista Santos is ineligible for regional rankings due to inactivity.
Fighters must have at least one completed MMA bout in the past two years to be ranked.

Evangelista “Cyborg” Santos earned his nickname by being one of the most relentless, violent, and aggressive fighters in the sport. A veteran fighter through and through, Santos began competing in bareknuckle Vale Tudo competitions in Brazil in 1997, and gained recognition with bouts in Pride. Santos raised his profile even further in a losing effort against Dutch kickboxer Melvin Manhoef in one of the best fights from 2006. Santos made his first big splash on the American MMA scene in 2010 by knocking out Dream Welterweight Champion Marius Zaromskis in the first round of their Strikeforce bout.

One of the most recognizable and intimidating figures in MMA in his own right, Santos is also married to the top female fighter in the world, Cristiane "Cyborg" Santos.