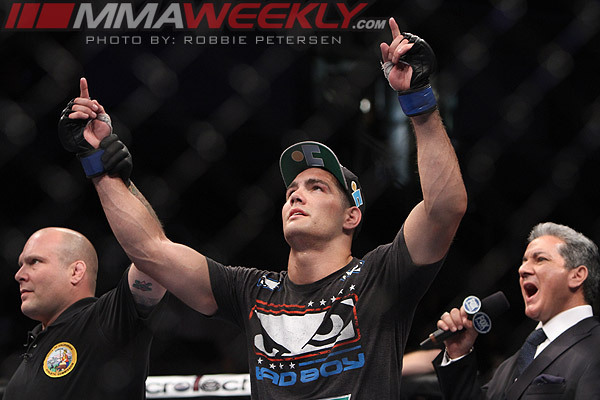 Fighting for a major organization has made Chris Weidman ineligible for regional rankings.

Take a look at some impressive stats for UFC Middlweight Champion Chris Weidman.

Beginning his career in 2009, Weidman has since taken the mma world by storm. After building up a 4-0 record in Ring of Combat, Weidman was declared one of the can't miss prospects of 2010 and 2011 by various mma news outlets and publications. With key wins over Demian Maia and Mark Munoz, Weidman remains undefeated in the UFC, and in his professional career overall. He has recently begun a vocal campaign to challenge middleweight kingpin Anderson Silva for the UFC Middleweight Championship.

A two time Division I All-American, Weidman has some of the best wrestling in the middleweight division today. Currently a brown belt in Brazilian Jiu-Jitsu, he possesses the ability to finish opponents with both the submission and grappling game. An underrated striker, Weidman was able to utilize his power to secure an impressive knock out victory over Mark Munoz at UFC on Fuel TV: Munoz vs. Weidman after connecting with a vicious elbow that quickly dropped his opponent.  After impressively defeating Munoz, Weidman challenged middleweight champion Anderson Silva to a fight for the UFC title.

At UFC 162, Chris would get the opportunity to challenge middleweight kingpin Anderson Silva for the UFC middleweight championship. Leading up to the fight, many of Chris' peers, as well as fellow UFC fighters, were picking Weidman to defeat Silva. Many believed Weidman could surprise the MMA community, but not many expected Weidman to defeat Silva the way he did. Weidman would catch Silva on the feet with his hands down, and finished the Brazilian legend with ground and pound, prompting referee Herb Dean to step in and stop the fight, crowning Weidman the new UFC middleweight champion. Weidman also earned himself Knockout of the Night for his TKO that stopped Silva's reign over the middleweight division.

Weidman would face Silva in a rematch at UFC 168. He would again win with a 2nd round TKO but it was due to the fact that Anderson broke his leg when Weidman checked a kick. Weidman was then set to defend the belt against former Light Heavyweight champ Lyoto Machida. Over the course of the 5 round fight Weidman has proved his dominance over the famed Brazilian striker constantly pressuring him, landing punches, body kicks and securing takedowns. The bloodied and bruised Machida rallied for one final flurry in the last minute of the fight, but his effort proved futile and Weidman was awarded a unanimous decision win on all the judges' cards.

Weidman was then scheduled to face another Brazilian in Vitor Belfort in December 2014 in a fight that has already been rescheduled earlier due to Belfort TRT problems. Unfortunately Weidman would be forced out of the bout due to an arm he broke in training late in September and the fight was rescheduled yet again, this time for February 2015. Due to yet another Weidman injury the bout was further rescheduled for May as the co-main event for UFC 187: Johnson vs. Cormier. After an initial scramble Belfort went on the attack unleashing a flurry of strikes that managed to cut the champion and bloody his nose. Weidman covered up and withstood the onslaught before counter-attacking. He took Vitor down and quickly transitioned to mount where he unleashed a ground-and-pound attack that rendered the Brazilian helpless and forced the referee Herb Dean to stop to fight at only 2:53 of the first round. This marked Weidman's third consecutive successful title defense and earned him his fifth UFC post fight bonus (this time a Performance of the Night).