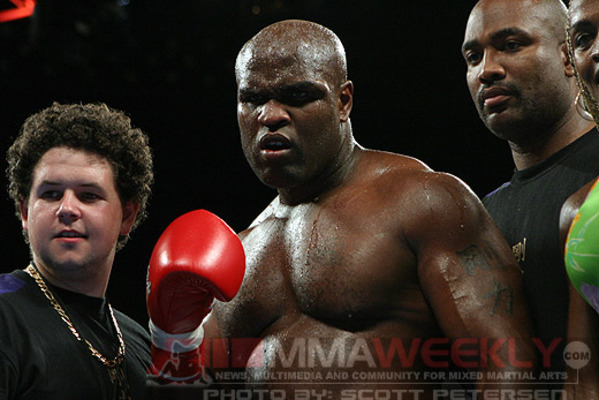 Gary Goodridge is ineligible for regional rankings due to inactivity.
Fighters must have at least one completed MMA bout in the past two years to be ranked.

A Super Heavyweight kickboxer and mixed martial arts fighter, Gary Goodridge was once considered a serious threat to any fighter in the world. He defeated Oleg Taktarov and Don Frye in the early days of his career.

Ten years later, however, Goodridge sports pedestrian professional records in both kickboxing and MMA, losing to most notable fighters in both sports. Goodridge has not won a professional kickboxing fight since 2006, and has not won a mixed martial arts fight since 2007. Nevertheless, he is remembered for the imposing figure he cut during early UFC and Pride events, as well as for some impressive finishes. His blistering headkick win over Don Frye was an all-time memorable knockout.

For his original UFC appearance at UFC 8, Goodridge claimed to have a black belt in the Korean art of "Kuk Sool Wan". This was later exposed to be a false marketing gimmick, as Goodridge had only received a black belt for agreeing to represent the art in the tournament.

Prior to entering the world of MMA competition, Goodridge was a world ranked champion at arm wrestling. He beat John Brzenk on more than one occasion. Brzenk is often considered the PFP best arm wrestler of all time.

Early in 2012 Goodridge was diagnosed with CTE/pugilistic dementia due to repeated head trauma which degenerates the brain tissue. Gary blames the damage on his kickboxing career and thinks it had nothing to do with his MMA career. Gary also just released a biography with Mark Dorsey called Gatekeeper: The Fighting Life of Gary "Big Daddy" Goodridge which talks about his days in the UFC, Pride and K-1 as well as personal information about his life and family.