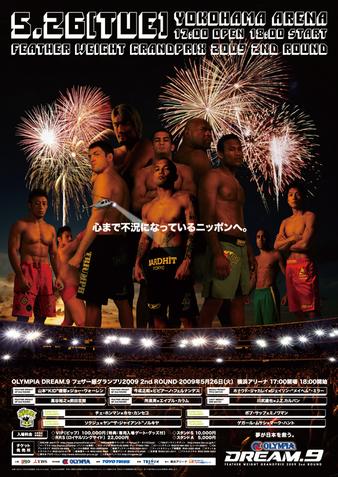 In the biggest event the promotion had put on to date, Dream 9, which took place in July 2009, featured the Quarterfinals of the Lightweight Grand Prix, with Bibiano Fernandes, Joe Warren and others moving on to the Semifinals. For his part, Warren continued to impress in his inaugural MMA run, defeating tournament favorite Norifumi “Kid” Yamamoto via Split Decision to advance after taking out Chase Beebe in the Opening Round.

In other action, the Quarterfinals of the 2009 Super Hulk Tournament kicked off at Dream 9, in which Gegard Mousasi, Rameau Thierry Sokoudjou, Hong Man Choi, and Ikuhisa Minowa advanced to the Semifinals. Baseball player Jose Canseco participated in the tournament, but was outmatched by the much larger Choi and submitted due to strikes early into the first round.