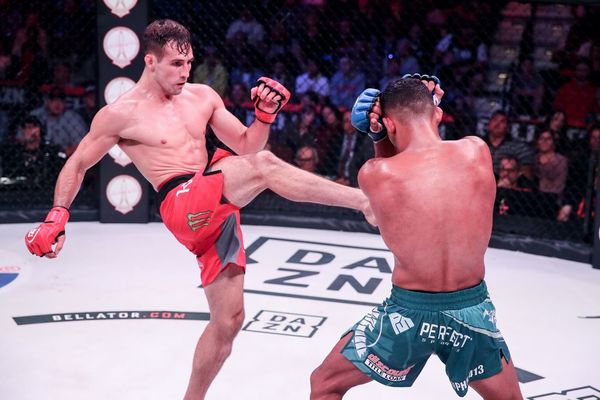 Fighting for a major organization has made Rory MacDonald ineligible for regional rankings.

Having trained at Toshido MMA in Kelowna, British Columbia, Canada since he was a teenager, Rory MacDonald is unique among most UFC fighters in that he started training for mixed martial arts competition at a young age. Also unique is the fact that MacDonald made his professional debut at the age of 16—with his parents’ permission—and promptly won nine fights in a row, finishing all of them and taking the KOTC Canada Lightweight Championship and the KOTC World Lightweight Championship in the process.

MacDonald made his UFC debut in January of 2010, submitting veteran Mike Guymon in the first round with an armbar. His next bout saw him against Carlos Condit, former WEC welterweight champion.  Ares dominated Condit for the first two and a half rounds, before we saw the more experienced Carlos Condit mount a comeback of the year worthy performance and finish MacDonald with just seven seconds left in the fight in what was a worthy fight of the year candidate.

Rory then had to pull out of his next fight after suffering a knee injury that required surgery, however, took the first loss of his career and the injury in stride and has since put together a three fight winning streak, defeating the likes of current lightweight championship contender Nate Diaz.

MacDonald is talked about as one of the most promising young fighters in the world given his well-rounded and aggressive skills both on the feet and on the ground, the polish on his game considering his young age, and his finishing ability.  Ares was scheduled to take on BJ Penn at UFC 152, however had to pull out due to a laceration suffered over his right eye during a training session.

On December 8th, 2012, MacDonald earned a unanimous decision victory over Penn at UFC on Fox 5. After his dominant performance over the former Lightweight and Welterweight Champion, MacDonald called out Condit, demanding a rematch of their UFC 115 bout to attempt to avenge the only blemish on his record thus far. The rematch was scheduled as of Co-Main Event of UFC 158, but MacDonald pulled out citing a neck injury and was replaced by Johny Hendricks.

Rory was then scheduled to face top contender Jake Ellenberger at UFC on Fox 8 in July. MacDonald would come away with the Unanimous Decision utilizing mostly his jab to earn points and win the rounds. It moves him up the welterweight ladder but remains to be seen if he will ever fight GSP if given the chance. MacDonald's 5 fight win streak would come to a halt when he faced Robbie Lawler at UFC 167 losing a close Split Decision. He next took on grappling ace, Demian Maia, at UFC 170. Although he was dominated on the ground in the first round, Rory was able to stuff nearly twenty takedowns from Maia and dominated the stand up with leg kicks and rangy punches on the way to a unanimous decision. They were also awarded the "Fight of the Night" bonus. He would follow that up with a decision over Tyron Woodley at UFC 174.

Following his win over Woodley he would go on to finish Tarec Saffiedine in the third round by TKO earning a Performance of the Night bonus as well as finally earning a title shot. He will face the winner of the Hendricks vs. Lawler rematch. Dana White also stated that the bout will be on Rory's home turf somewhere in Canada.