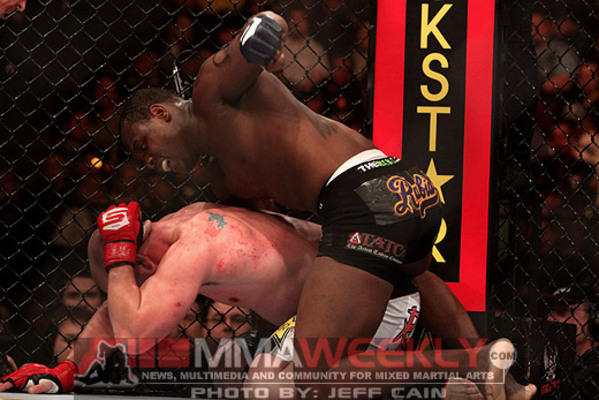 Fighting for a major organization has made Ovince St. Preux ineligible for regional rankings.

Ovince St. Preux was a star wrestler in his hometown in Florida, he was also a football player who played from 2001-2004 for the University of Tennessee. When he graduated in 2004 he began training in kickboxing and grappling. He began his MMA career in 2008 losing his first two fights. He would stick with it and eventually be signed to Strikeforce. He would win 6 fights for the promotion with his only loss coming at the hands of Gegard Mousasi.

With the collapse of Strikeforce OSP would sign with the UFC and make his debut at UFC 159 against Gian Villante. He would win the fight by Majority Technical decision when an inadvertent eye poke caused Villante to say he couldn''t see. The ref immediately stopped the fight and it went to the judges card. He would defeat Cody Donovan four months later at UFC Fight Night 26. He would then take on former heavyweight, Nikita Krylov, at UFC 171. St. Preux was able to take Krylov down and as he got into side control Krylov continued trying to hang on to a Guillotine Choke. St. Preux was able to use this to advantage and sink in the Von Flue choke that would put Krylov unconscious. The finish would earn St. Preux his first bonus for Performance of the Night.