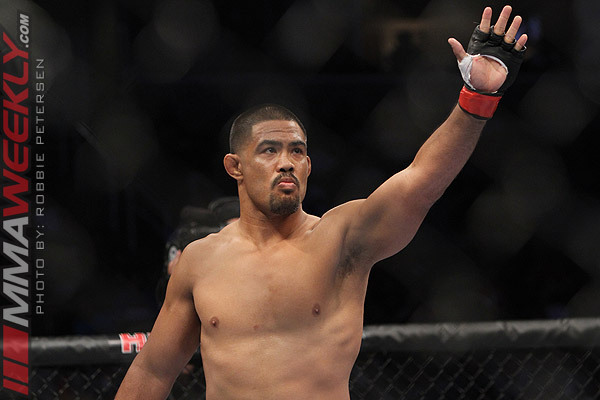 Mark Muñoz is ineligible for regional rankings due to inactivity.
Fighters must have at least one completed MMA bout in the past two years to be ranked.

There is no doubt that Mark Muñoz is one of the most decorated collegiate wrestlers to have ever competed inside the octagon, winning Big 12 titles along with back-to-back All-American honors wrestling for Oklahoma State University. He earned a Bachelors degree in Health Science while at OSU. He currently trains out of Kings MMA in Lake Forest, California. The Filipino Wrecking Machine is a veteran of the WEC and the UFC. In his thirteen wins, he has earned seven stoppages with six T/KOs.

Munoz made his professional MMA debut in 2007, quickly assembling five straight victories, including two wins in the WEC prior to joining the UFC in 2009 when Zuffa dissolved the larger weight classes in the WEC. Munoz then received a rude welcome into the world's top promotion, as Matt Hamill knocked him out in the first round  with a brutal head kick in his promotional debut. Following the loss to Hamill and a serious upgrade to his striking game, Munoz bounced back with victories over Nick Catone, Ryan Jensen and an impressive comeback win over Kendall Grove, proving that he does indeed belong with the best in the middleweight division. He would lose to Yushin Okami by Split Decision before going on a 4 fight streak win streak with wins over Aaron Simpson, C.B. Dolloway, Demian Maia and Chris Leben. He would then face upcoming prospect Chris Weidman but he would taste defeat again as Weidman hit him with vicious elbow finishing him in the 2nd round.

After a year long layoff Munoz would return to a Unanimous Decision victory over Tim Boetsch at UFC 162 in which he looked to be in top form. He took on the elusive Lyoto Machida for his next fightin the main event of UFC Fight Night 30 but was quickly stopped by a head kick knockout in the first round.

Muñoz is primarily known as a dangerous wrestler with amazing ground & pound and is not known for utilising his offensive submission skills despite holding a purple belt under MMA legend Minotauro Nogueira.