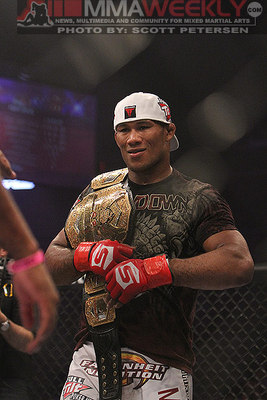 Fighting for a major organization has made Ronaldo Souza ineligible for regional rankings.

Known to most simply as “Jacare,” Ronaldo Souza is simply, and truly, one of the greatest grapplers in MMA today. In addition to winning the Brazilian Jiu-Jitsu World Cup in 2004, the decorated black belt is also a 2004 CBJJ Pan American Champion as well as a 2005 ADCC 77-87 kg World Champion and Absolute division runner up, having lost only to Roger Gracie who outweighed him by 25 pounds. He has beaten the likes of Robert Drysdale and Marcelo Garcia in grappling competitions. He holds black belts in both Brazillian Jui Jitsu and Judo. He is generally regarded as one of the absolute best pure submission fighters in the world, especially in professional MMA competition.

Jacare made an uninspiring professional MMA debut in 2003, losing in the first round by knockout. After that dismal performance, Souza bounced back with a 10-fight winning streak, submitting all but one of his opponents, Jason “Mayhem” Miller, whom he defeated by Unanimous Decision in the second round of the 2008 Dream Middleweight Grand Prix. Although Souza would go on to lose in the finals of the Grand Prix to highly-regarded light heavyweight Gegard Mousasi, he returned to his next bout new and improved.

He made his Strikeforce debut over a year later and displayed far more developed standup game. he still reverted to what he knows best and submitted Olympic wrestler, Matt Lindland in the first round with an arm triangle choke. Jacare’s improved standup was also on display in his Strikeforce tilt with Joey Villasenor, whom Jacare had to fight to a gritty decision in order to get the nod.

Jacare then faced Tim Kennedy for the vacant Strikeforce Middleweight Champion after former champion Jake Shields left for the UFC.  It took another hard fought decision but Jacare was able to secure the win against Kennedy and became the Strikeforce Middleweight champion. A successful title defense and eleventh career submission win over Robbie Lawler set up a title fight against Luke Rockhold. Jacare ultimately fell to the California native, Rockhold, by decision as he was unable to take the fight to the ground to take advantage. Since losing the title, Jacare has picked up yet another submission win as well as his first career TKO win over Derek Brunson. He was set to fight UFC crossover fighter, Ed Herman, at Strikeforce's last event. He was able to make ahort work of Herman, submitting him in the first round.

Souza would join the UFC with the dissolution of Strikeforce and get matched up against Costa Philippou for his first fight for the promotion. However Costa would suffer an injury during training and would be replaced by Chris Camozzi who would step in to fight Souza on the UFC on FX 8 card. Souza was impressive in his UFC debut making quick work of Camozzi with a first round arm triangle to earn Submission of the Night. He would also impress in his next fight finishing Yushin Okami by TKO in the first round. He would follow that up with a close decision win over Francis Carmont. He would follow that up and get revenge on Gegard Mousasi with an impressive submission finish in the main event of UFC Fight Night 50. The victory may still not put him up for a shot at the title but it did earn him a performance of the night bonus.

Although he has been susceptible to powerful strikers in his two career losses to date, Souza is so accomplished in the realm of submission fighting that his strength on the ground usually outweighs his deficiencies on the feet. He has notched submission finishes in all but one of his career wins. As his standup continues to improve, he figures to be among the top fighters in the world in his weight class.