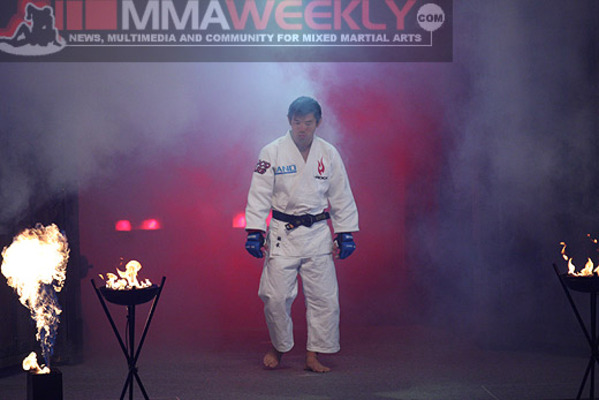 Makoto Takimoto is ineligible for regional rankings due to inactivity.
Fighters must have at least one completed MMA bout in the past two years to be ranked.

Makoto Takimoto is a retired Japanese Mixed Martial Artist and a multi-medal Judo champion from Iwai, Japan. He competed mainly in Pride Fighting Championships and World Victory Road/Sengoku Raiden Championships, with a lone bout at the one off Yarennoka! event.
Takimoto won medals in multiple judo competitions during his time as a judo competitior. He won a gold medal at the 1995 Asian Championships, the bronze medal at the 1997 East Asian Games, and the bronze medal at the 2000 Asian Championships. Takimoto's crowning achievement in judo, however, came when he won the gold medal at the 2000 Sydney Olympics.
Takimoto threw his hat into the MMA ring at the end of 2004, when he competed at Pride Shockwave 2004. In his first MMA bout Takimoto faced Henry "Sentoryu" MIller and he would go on to defeat the ex-sumo via unanimous decision.
Takimoto would square off with Kiyoshi Tamura at Pride Critical Countdown 2005, where Takimoto would be defeated via unanimous decision.
Takimoto would get back into the win column at Pride 30 when he beat Dong Sik Yoon via unanimous decision. Takimoto's last fight of 2005 would be against Sanae Kikuta at Pride Shockwave 2005, where he would loss a unanimous decision to his fellow countryman.
Takimoto would compete only once during the whole of 2006, losing via quick TKO to Gegard Mousasi at Pride Bushido 11.
2007 would be the high point of Takimoto's MMA undertaking, as he recorded back to back victories for the first time in his career. He first defeated Zelg Galesic via kimura at Pride 34, Takimoto's first finish and submission victory. He then beat MMA and BJJ legend Murilo Bustamante via split decision at the one off Yarennoka! event on December 31, 2007.
2008 would be a winless year for Takimoto. He lost both of his bouts, first via an achilles lock to Evangelista "Cyborg" Santos at World Victory Road: Sengoku First Battle, and then to Frank Trigg via unanimous decision at WVR: Sengoku 4.
2009 would be a return to winning ways for Takimoto as he went 2-0 for the year. He would first pick up a win over Michael Costa via heel hook at Sengoku 8, and would then best Jae Sun Lee at Sengoku 10.
Sengoku 10 would be the final event of Takimoto's career. He was originally tapped to fight on April 25, 2010, at ASTRA, the retirement event for fellow judoka Hidehiko Yoshida. However, Takimoto instead announced his retirement along with Yoshida, ending his MMA career with a record of 6-5.