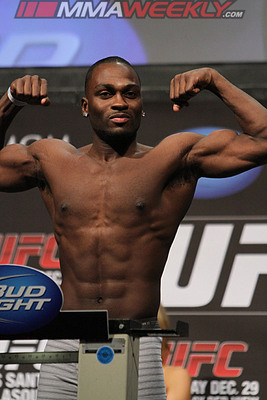 Fighting for a major organization has made Derek Brunson ineligible for regional rankings.

Derek Brunson is an American middleweight fighter currently signed to the UFC. He fights out of Renzo Gracie's academy in New York and Jackson's MMA in New Mexico. He has fought for promotions such as Shofight and Strikeforce and holds notable wins over Lumumba Sayers and Chris Leben. Of his eleven wins, eight have been stoppages with equal numbers of submissions and T/KOs. He has won the "Fight of the Night" bonus one time.

Brunson is a former NCAA division ll wrestler turned mixed martial artist. He wrestled in college for the University of North Carolina at Pembroke where he was a three time All American. His nickname of "the human blanket" comes from his wrestling base. After college, Brunson immediately took up MMA, training at Renzo Gracie's Jiu Jitsu academy. He won his first six fights on the local circuit, five of which were by strikes. He eventually moved his camp to Jackson's MMA.

In 2011, Brunson debuted in Strikeforce. He went on to win his first three fights with the promotion. He was next supposed to fight Ronaldo Souza but the Ohio State Athletic commission would not allow him to fight with contact lenses as he had done in previous fights. He immediately had LASIK eye surgery to remove the need to wear contacts. He fought once outside of Strikeforce which resulted in a controversial decision loss to UFC veteran Kendall Grove. He returned to Strikeforce in August 2012, again scheduled against Ronaldo Souza. He would lose to the former Strikeforce champion by strikes in the first minute of the fight.

He was supposed to debut with the UFC on the seventeenth season of The Ultimate Fighter but on the first day of filming, he was pulled from the cast due to his Strikeforce contract linked to Showtime which he they would not release him from. He filled in for an injured Karlos Vemola against Chris Leben at UFC 155, his UFC debut. In the fight were he was an underdog, he surprised many by earning a decision victory against the long time UFC employee. He next took on the debuting Brian Houston at UFC: Fight for the Troops 3. After rocking Houston almost immediately with a head kick, he was able to sink in a rear naked choke to get the submission win. He would get back to action two months later when he was matched up with Yoel Romero at UFC Fight Night 35, but this time he would lose a back and forth fight by TKO with less than two minutes left in the fight. Both fighters were awarded the "Fight of the Night" bonus for their performance.

Brunson would get back in the win column with a Unanimous Decision over Lorenz Larkin at UFC 177.