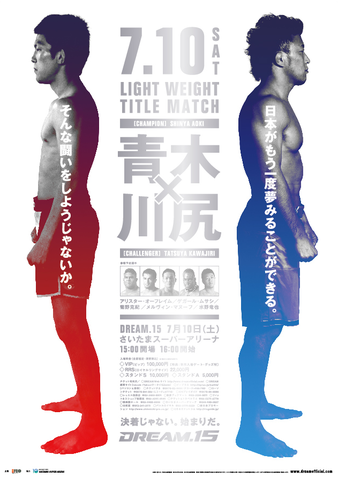 Tapology members can make predictions for upcoming MMA & Boxing fights. Dream 15 is closed for new predictions. 6 total members made predictions on this event, breaking down as follows below.

Leaderboard of the best predictions by member: Dream 15 Leaderboard

While it did not approach the level of depth of its previous tournaments, the four-man Light Heavyweight Grand Prix at Dream 15 marked a return to the promotion’s tournament-style roots. In tournament action, Gegard Mousasi submitted Jake O’Brien in the first round, while Tatsuya Mizuno submitted inconsistent striker Melvin Manhoef in the first round as well.

In the main event, Lightweight Champion Shinya Aoki defended his title against Japanese rival Tatsuya Kawajiri with a first-round Ankle Lock, proving his dominance on the Japanese circuit after falling short earlier that year in a fight with Strikeforce Champion Gilbert Melendez in the United States.

MMA highlight video maker Machinemen gives us this Dream MMA restrospective featuring highlights from every dream event up through Dream 15.