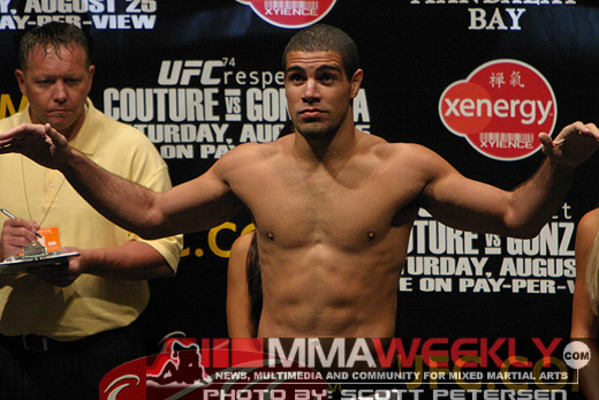 Thales Leites is ineligible for regional rankings due to inactivity.
Fighters must have at least one completed MMA bout in the past two years to be ranked.

Thales Leites is a brazilian mixed martial artist who holds a 1st degree black belt in Brazilian Jiu Jitsu. He would begin his MMA career with an excellent run going 9-0 while finishing all but 1 of his opponents. His biggest win in that run was over Jose Landi-Jons also known as Pele. The win was enough to catch the eye of the UFC who would pick Leites up.

He would debut at the Ultimate Fighter 4 Finale losing a decision to Martin Kampmann. However after that loss he would go on a 5 fight win streak with victories over notable names like Nate Marquardt, Pete Sell and Drew McFedries. It was enough to earn him a title shot at the reigning champion Anderson Silva. However he would end up on the losing end of a decision at UFC 97 when they fought. His next fight was a Split Decision loss to Alessio Sakara at UFC 101 causing him to be cut from the promotion.

Leites would continue to fight for other promotions and picked up wins over some names like Dean Lister, Jeremy Horn and Matt Horowich on way to a 6-1 post UFC record. It had been over a year since his last fight but the UFC decided to give him another shot and he would defeat Tom Watson at UFC 163 by Unanimous Decision. His UFC return would continue to go well for him picking up a decision over Ed Herman and his first TKO victory since 2005 over Trevor Smith. Leites would continue his triumphant return to the UFC with a second straight TKO finish when he defeated Francis Carmont  at UFC Fight NIght 49 also earning a Performance of the Night bonus.

Leites would again finish in spectacular fashion against Tim Boetsch at UFC 183. Boetsch looked like he really had Leites in trouble but Leites would bounce back and finish him with an arm triangle in the second round to pick up his 6th win since returning to the UFC. Leites would also pick up the Fight of the Night bonus and the Performance of the night bonus.