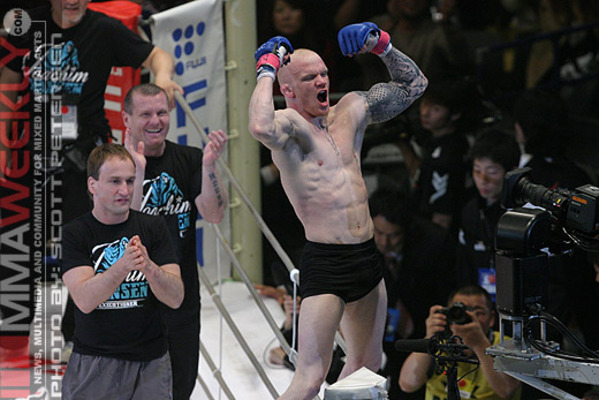 Joachim Hansen is ineligible for regional rankings due to inactivity.
Fighters must have at least one completed MMA bout in the past two years to be ranked.

The intimidating "Hellboy," Joachim Hansen, has cultivated one of the coolest in-ring personas in all of mixed martial arts. Known for his striking ability and a highlight reel of knockouts, the Norwegian lightweight and featherweight fighter is also a decorated Brazilian Jiu-Jitsu competitor, having won numerous European grappling tournaments from 1999 to 2002. Hansen made his pro MMA debut in 1999 and defeated notable lightweights Takanori Gomi, Gesias Calvancante, Caol Uno, and Yves Edwards. After a solid, multi-year run in the PRIDE Fighting Championships, Hansen fought for DREAM, and became the first-ever DREAM Lightweight Champion when he defeated Shinya Aoki in 2008.

In addition to his considerable skill on the feet and knockout power, Hansen is extremely difficult to knock out, though he has shown a susceptibility to high-level grapplers, having been submitted on more than one occasion. In addition to his win over Aoki, Hansen’s most impressive victory occurred in 2006, when he knocked out Luiz Azeredo with a perfectly timed knee as Azeredo shot in for a takedown.

Hansen began his career fighting for Finnish promotion FinnFight before moving on to fight for Shooto's Finnish branch. His performance got him invited to Shooto's year-end show in 2002 where he, with a 3–1 record, faced Takumi Nakayama who at the time had 14 fights under his belt. Hansen won a majority decision. Hansen's performance impressed Shooto-veteran Rumina Sato who challenged Hansen after the match. Three months later the two met, with Hansen defeating the Japanese fighter two minutes into the bout by TKO. The win set him up for a title shot against the Shooto World Welterweight Champion, and at the time 14–0, Takanori Gomi. The fight went the distance with Hansen being awarded a majority decision, making him the Shooto World Welterweight Champion and first Scandinavian person to hold a MMA world title. Hansen's first title defense was against another undefeated fighter in Vitor Ribeiro who took away Hansen's title by submitting him two minutes into the second round.