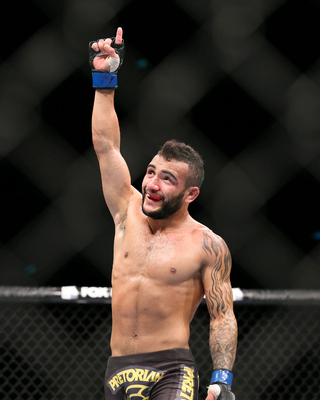 Fighting for a major organization has made John Lineker ineligible for regional rankings.

John Lineker is a Brazilian flyweight fighter currently signed to the UFC. He is a veteran of Shooto Brazil, Jungle Fight and the UFC. He has held bantamweight titles in Nitrix Fights Grand Prix and Jungle Fight. Although he has six losses on his record, five of them came when he took eleven fights in the first fifteen months of his career. Of his twenty three wins, fourteen have been finishes including eleven T/KOs. Before his debut in the UFC, he was riding a thirteen fight win streak. John has missed weight for three of his UFC fights. He came in at 127 pounds for his debut against Louis Gaudinot, 129 pounds against Jose Maria, and 128 pounds against Phil Harris.

Lineker began his career fighting on the regional circuit in his native Brazil. After a rocky 6-5 start, he would go on a three year, thirteen fight win streak which earned him a spot in the UFC. He was tapped as one of the initial members of the UFC's flyweight division. He would make his promotional debut against TUF 14 competitor, Louis Gaudinot, in what would go on to earn 'Fight of the Night' honors. Lineker and Gaudinot spent many various moments throughout the fight in wild punching exchanges, until Gaudinot choked the Brazilian to sleep in the second round with a guillotine. Lineker would get back to his winning ways by winning three straight over Yasuhiro Urushitani, Azamat Gashimov and Jose Maria Tome proving that he could be a force in the flyweight division.

John took on Phil Harris at UFC Fight Night 30 in Manchester, England and was able to dispatch the Brit in the first round to earn a TKO victory.. This was his fourth UFC fight in less than a year. Lineker again missed weight for this fight marking the second consecutive and third overall UFC fight that he has not made weight. It is unclear what, if any, the consequences will be for his repeated weight misses. He  would take on Ali Bagautinov at UFC 169 in what was likely to be a number one contender fight. He would lose to the Russian by unanimous decision.

Lineker bounce back with a TKO over Alp Ozkilic in the third round. He would follow that up with an upset over Ian McCall picking up the Unanimous Decision at UFC 183. Lineker would miss weight for the fourth time against McCall prompting Dana White to say that Lineker will never fight at flyweight again he will have to move up to bantamweight.