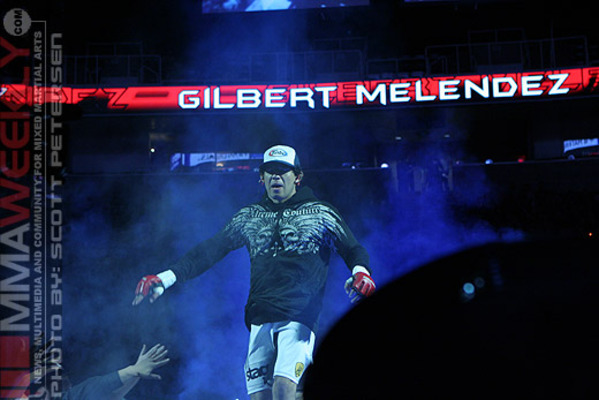 #97
Greatest MMA Fighter of All Time

Gilbert Melendez is ineligible for regional rankings due to inactivity.
Fighters must have at least one completed MMA bout in the past two years to be ranked.

Gilbert Melendez is a lightweight fighter who trains out of Ceasar Gracie Jui Jitsu in Can Francisco, California. He is a veteran of WEC, Rumble on the Rock, Shooto, Strikeforce, Pride and the UFC. He was the first WEC lightweight champion and the last Strikeforce lightweight champion. While with Strikeforce, he set a number of records for the promotion including most championship bouts with 10, most title defenses with 6, most wins with 11 and most significant strikes landed with 749. El Nino has only been finished once by Anthony Pettis via guillotine choke but has finished 12 of his 21 wins, including 11 T/KOs.

Shortly after going professional in 2002, Gilbert Melendez established himself as one of the fastest-rising MMA prospects in the world at 155 lbs., becoming the first WEC Lightweight Champion in his fourth professional fight against Olaf Alfonso in 2004. Melendez would continue to put on dominant performances over the next three years, running his professional record to 13-0, with notable wins over Clay Guida and Tatsuya Kawajiri, before losing the first fight of his career to Mitsuhiro Ishida in Saitama, Japan in 2007.

After another loss, this time to Josh Thomson, cost him his Strikeforce Lightweight Championship in 2008, Melendez was forced to regroup. He returned with an obvious chip on his shoulder and went on a tear in the promotion, kicking his already high level of intensity up another notch and winning three straight fights in convincing fashion. Melendez blasted out Rodrigo Damm, avenged his losses to Ishida and Thomson, and regained the Strikeforce title in 2009. Next up, an eagerly awaited title defense between Melendez and Shinya Aoki on CBS turned into a coronation for "El Nino," with the Japanese grappler unable even to get to square one with his ground game over five long rounds.

Melendez is known for his finishing ability, wrestling control, and ceaseless fury when he steps into the cage. He is one of the best in the world at 155 lbs. He would then sign with the UFC since Strikeforce went under and received an immediate title shot against the current Lightweight Champ Ben Henderson. In a close fight Melendez would lose by a Split Decision to Henderson. This fight snapped a seven fight and nearly five year win streak. He was looking to rebound when he fought Diego Sanchez at UFC 166. In an epic brawl that will go down as one of the best fights in MMA history, Gil was able use his more accurate striking to win a unanimous decision. Dana White stated after the fight that this win put Melendez back into the mix for the title. And he was true to his word as Melendez is now going to coach the 20th season of the Ultimate Fighter and get another crack at the title this time against Anthony Pettis.

On December 6th, 2014 at UFC 181 Gilbert Melendez was defeated by Anthony Pettis via guillotine choke in the second round.