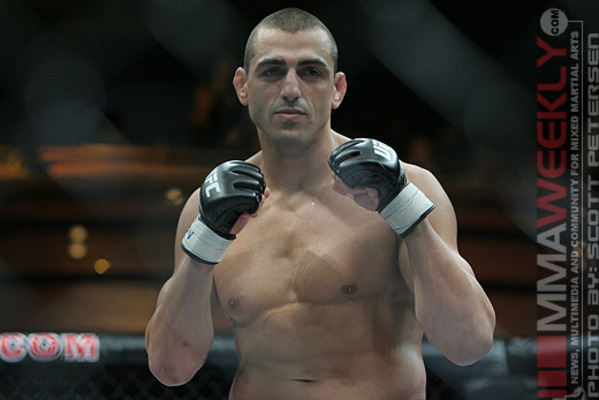 George Sotiropoulos is ineligible for regional rankings due to inactivity.
Fighters must have at least one completed MMA bout in the past two years to be ranked.

A Black Belt in Brazilian Jiu-Jitsu and a Victoria State Amateur Boxing Champion, George Sotiropoulos has established himself over the past several years as one of the very best Australian professional mixed martial artists, and a budding star.

After running his professional record to 7-2 prior to joining The Ultimate Fighter 6 Welterweight Tournament in 2007, Sotiropoulous’s only career defeats had come to Kyle Noke—who competes in the middleweight division—in a decision loss he has since avenged, and a DQ loss to Shinya Aoki after kicking Aoki in the groin.

While he did not win The Ultimate Fighter 6 after being poked in the eye by Tommy Speer in the Semifinals of the show, Sotiropoulos did earn a win in his first official bout with the UFC after submitting Billy Miles with a Rear Naked Choke. Sotiropoulos went on to finish his next three UFC opponents before earning the biggest win of his career by defeating former top contender Joe Stevenson by Unanimous Decision in their match from UFC 110. The Stevenson match was held during the UFC’s first event in Sydney, Australia, and resulted in absolute crowd delirium as Sotiropoulos imposed his will on Stevenson throughout the fight, and got the better of a number of standup exchanges. In his next fight, the surging Sotiropoulos was paired with the equally hot Kurt Pellegrino to see which man would keep his winning streak alive. In a smooth, professional performance, Sotiropoulos took the decision, stifling "Batman's" offense for most of the affair.

Sotiropoulos's next fight would come in a Fight of the Night affair against Joe Lauzon at UFC 123. Sotiropoulos submitted Lauzon via kimura lock at the 2:43 mark of the 2nd round.

In his next UFC appearance, Sotiropoulos would face Dennis Siver in his home country of Australia at UFC 127. Sotiropoulos was unable to take the fight to the ground and lost a striking filled unanimous decision, giving him his first UFC loss.

Sotiropoulos had a bout scheduled at UFC 144 against Japanese fighter, Takanori Gomi. However, Sotiropoulos was forced out of the fight with an injury.

Selected as the Australian coach for the first UK vs Australia TUF, Sotiropoulos faced British coach Ross Pearson in a 5 round main event bout. After being knocked down in the first 2 rounds, Sotiropoulos finally succumbed to strikes in the 3rd round, giving him his 3rd straight UFC loss.

Sotiropoulos is best known for his aggressive and relentless Jiu-Jitsu style, including some of the most fluid guard passing in the UFC as well as a highly effective rubber guard. But Sotiropoulos also calls on an amateur boxing background to damage opponents with a rangy jab before taking the fight to the floor and looking for the submission.

After a brilliant 7-0 start to his UFC career, George lost his next four fights and was released from the UFC in late 2013.

Episode 7 Sotiropoulos def. Jared Rollings by TKO at 3:48 of Round 1

Episode 10 Sotiropoulos def. Richie Hightower by Kimura at 4:07 of Round 1