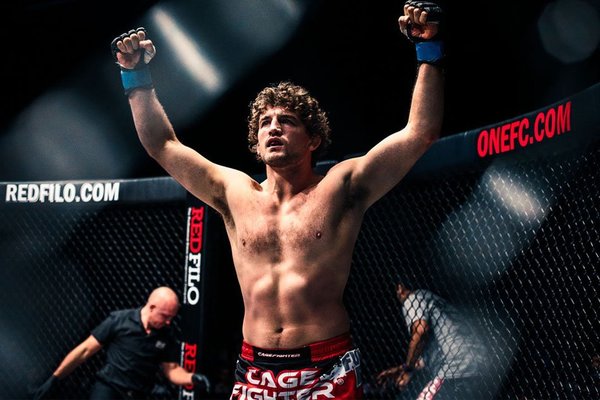 #18
Greatest MMA Grappler of All Time

Ben Askren is ineligible for regional rankings due to inactivity.
Fighters must have at least one completed MMA bout in the past two years to be ranked.

A two-time NCAA Division I National Wrestling Champion, Ben Askren already had a lengthy freestyle wrestling resume prior to competing in the 2008 Olympic Games. Although he did not medal in the Olympics, Askren's transition to professional mixed martial arts competition in 2009 marked the arrival of one of the highest level elite wrestlers to enter the sport in years.

Since turning pro in 2009, Askren has justified the hype, controlling all of his opponents to date en route to dominant decision or submission victories. After amassing a 3-0 record on the local circuit, Askren competed in Bellator's Season 2 Welterweight Tournament, defeating Ryan Thomas (twice) and the skilled Dan Hornbuckle to earn a shot at Welterweight Champion Lyman Good.

Askren's tenacity and creativity as a wrestler - despite not having a fully well-rounded set of mixed martial arts skills - led to him going into his bout against Lyman Good as the odds-on favorite. Askren dominated Tiger Schulman protege Good in much the same fashion that he did Hornbuckle, using a stifling combination of takedowns, guard passing and top control to brutalize his way to a lopsided decision. As of yet, no combination of striking and Jiu-Jitsu has managed to solve the riddle posed by Askren, one of the greatest wrestlers to enter MMA.

Since winning the belt Askren has successfully defending his belt 4 times over tough competition. He defeated Jay Hieron by a very close Split Decision followed by a Unanimous Decision over Douglas Lima. In his most recent victory there was a doctor stoppage after the end of the 3rd as Karl Amoussou's eye was completely shut giving Askren his third title defense. He would rack up his fourth defense and second finish in a row when he finished off Andrey Koreshkov in the 4th round by TKO.

Following the win Askren was actually released from the promotion. With no offer from the UFC he would sign with ONE FC; he made  his debut against Bakhtiyar Abbasov in the Main Event on the 30th of May 2014. He submitted his opponent in the very first round, continuing his streak of finishes. With that victory he earned a shot at the ONE FC welterweight strap. He fought incumbent champion Nobutatsu Suzuki and took only 1:24 seconds to submit the Japanese fighter, extending his finishing streak to 4, and adding another championship belt to his collection.