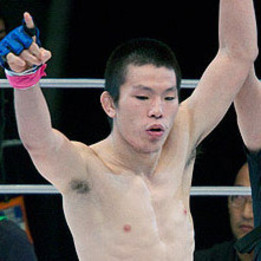 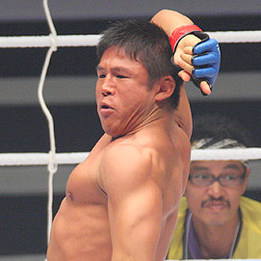 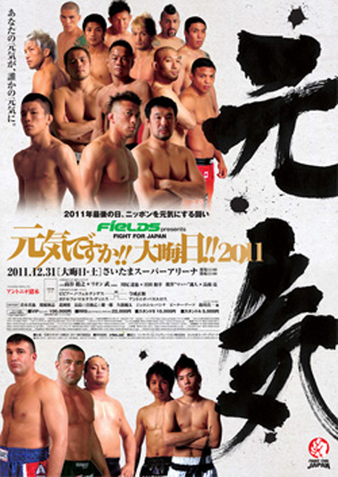 Aoki and Kitaoka took to the ring for the co-main event of the evening for the lightweight title.

Aoki clinched up with Kitaoka early and took him down against the ropes, fighting off a Guillotine attempt as he passed to side control. Aoki took Kitaoka's back in a scramble then locked in a Triangle Choke from the bottom when Kitaoka shook him off. Aoki switched from the Triangle to an Armbar but Kitaoka escaped and got back to his feet. Aoki took Kitaoka down again against the ropes but the challenger popped back up. Kitaoka landed a right cross but got taken down again. Aoki postured up and landed some strikes from the top before the bell.

Aoki came out aggressive in the second and got Kitaoka down again. Aoki looked to pass Kitaoka's crafty guard while maintaining control, but he had his work cut out for him. Finally the ref stood the fighters up in the final minute when it became clear that Aoki was not going to advance position. Aoki landed some nice kicks to the body on the feet before securing another takedown before the bell.

Aoki landed another kick to the body to start the third then clinched Kitaoka and worked some knees to the body before getting a takedown. Aoki spun to Kitaoka's back and locked in the body triangle, working for a submission. Kitaoka spun out of the choke and evaded a Triangle choke attempt to land some ground and pound from the top. Aoki landed a head kick after getting back to his feet and got a final takedown at the end of the round.

Aoki went to touch gloves in the final round and Kitaoka attacked with a punching combo that backed the champion off. Aoki clinched up with him and took Kitaoka down again, passing to side control. Kitaoka managed to get back to his feet in a scramble and gabbed a rear body lock on the champion, but Aoki spun into him and attacked with knees from the clinch again. Aoki got another easy takedown but the ref stood the fighters up after a period of inactivity. Kitaoka landed some knees to the head from a front headlock position before the bell, but it was too little, too late.

The judges scored the bout for Aoki across the board.