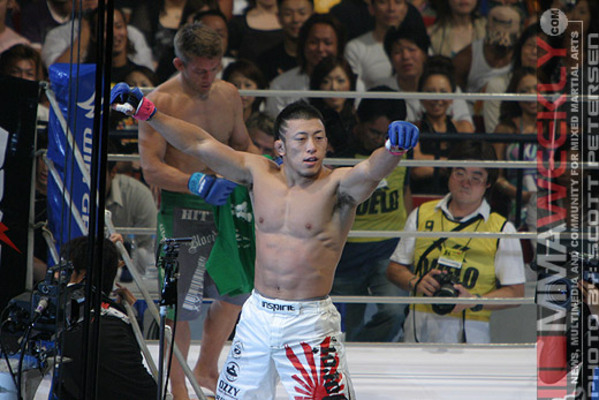 Fighting for a major organization has made Tatsuya Kawajiri ineligible for regional rankings.

Although he lost his professional MMA debut against Takumi Nakayama in 2000, that would not be a sign of things to come for the popular Japanese fighter affectionately known as “Crusher.” Since his debut, Tatsuya Kawajiri has fought and defeated some of the best fighters in the lightweight division, including Yves Edwards, Joachim Hansen, Luiz Azeredo, and Gesias Calvancante, and he has only been knocked out in one fight, when Eddie Alvarez defeated him in one of the most exciting and talked-about fights of 2008. Kawajiri hurt Alvarez considerably and repeatedly in that fight, a testament to his heavy hands.

After fighting some of the world's best at 155 pounds, Kawajiri would make the drop to featherweight after a TKO victory over veteran Drew Fickett. He made his featherweight debut in a rematch against Joachim Hansen at DREAM 17, and won by third round arm triangle choke. Since making the drop to 145, Kawajiri is undefeated in this new weight class, submitting all three of his opponents as a featherweight. "Crusher" is also currently contracted to One FC.

In addition to his knockout power and considerable grappling ability, Kawajiri is unique among Japanese mixed martial artists in that he is one of the few Asian fighters to have truly embraced a more modern style of combat, electing to mix up his striking with a western-style grappling and inflicting serious damage from top position on the ground.

He has made a habit of appearing on Dream's annual New Years Eve Show. He would fight Michihiro Omigawa in his fourth straight NYE show at Dream 18 winning by Unanimous Decision.

Kawajiri also has competed in kickboxing, as he made his K-1 debut fighting Kozo Takeda at Dynamite!! 2008. Kawajiri successfully defeated Takeda by KO with 13 seconds remaining in the first round. Kawajiri however quickly stepped up and fought K-1 legend, Masato at the K-1 World Max 2009 Final event in a fight where Kawajiri was brutally battered to a TKO corner stoppage in 1:43 of the second when Kawajiri's corner saw and threw the towel in to save Kawajiri in the battle.

He would finally be signed to the UFC and would get a submission in the second round against Sean Soriano. He is now set to face Clay Guida in his next match at UFC Fight Night 39.