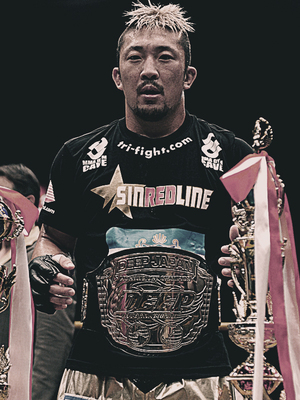 Fighting for a major organization has made Mizuto Hirota ineligible for regional rankings.

Former Sengoku Lightweight Champion Mizuto Hirota was on the receiving end of one of the most brutal submission finishes in MMA history, but after sitting out for a year and a half after having his arm broken, Hirota has had a resurgence in his MMA career.

Hirota is known mainly as a boxer with some wrestling skill, scoring eight of his 14 victories by KO/TKO. After defeating Satoru Kitaoka to win the Sengoku title, he would then fight Shinya Aoki at Dynamite!! 2009. There was bad blood between the two, as Aoki was out to get revenge for his teammate who had just suffered a loss to Hirota. Aoki caught Hirota in a hammerlock, but Hirota refused to submit. Aoki then brutally broke Hirota's arm, and then proceeded to give Hirota the finger after the win. After this, Hirota would not fight again for over a year and a half. However, when he returned, he would win two fights against Katsunori Kikuno and Seichi Ikemoto, which would earn him a fight for Strikeforce against Pat Healy.

Hirota surprised many when he gave Healy a very tough fight in his U.S. debut. However, he would lose a decision to the veteran, in a fight that some thought Hirota deserved to win. As Strikeforce folded, Hirota would be brought into the UFC as a featherweight. In Hirota's featherweight debut, he would lose a unanimous decision to BJJ wizard Rani Yahya. Hirota proved to be a tough customer on the ground, not only by fending off a tight arm triangle choke from Yahya, but even coming very close to landing an armbar from his back against the one time ADCC champ.

Hirota would lose in his final UFC appearance, when he dropped a split decision to Rodrigo Damm at UFC on Fuel TV: Nogueira vs. Werdum on June 8, 2013. Hirota was subsequently released from the UFC.

Hirota would take nearly a year off following his defeat to Damm, returning on April 29, 2014 to face Daisuke Nakamura at DEEP: 66 Impact. He would defeat Nakamura via unanimous decision, earning his first win in a little over two years. It was the beginning of a three fight win streak for Hirota, who would go on to beat Masakazu Imanari via TKO at DEEP: 69 Impact on OCtober 26, 2014; his third win of the year came next against Kyu Hwa Kim at DEEP - DREAM Impact 2014: Omisoka Special. Hirota would win the fight via TKO.