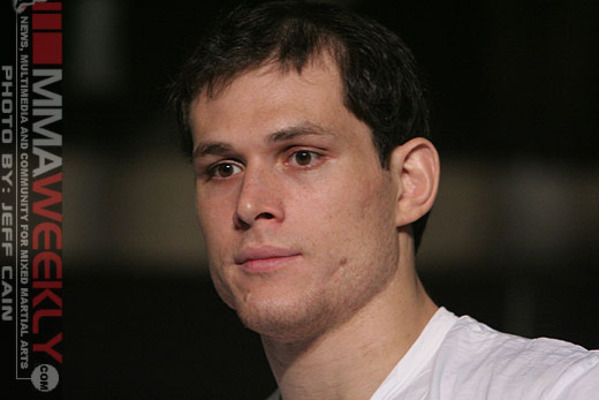 #36
Greatest MMA Grappler of All Time

Roger Gracie is ineligible for regional rankings due to inactivity.
Fighters must have at least one completed MMA bout in the past two years to be ranked.

While he has yet to attain the same level of success in his professional fighting career, Roger Gracie is one of the most decorated Brazilian Jiu-Jitsu practitioners to enter the sport since its inception. He is perhaps the top fighter currently active from the famed Gracie clan of Jiu-Jitsu fighters. He is a second degree brazillian jui jitsu black belt under Carlos Gracie Jr. Gracie is the founder and head instructor at The Roger Gracie Academy in London, England.

Roger found success early on in his submission fighting career, but it was not until he won two titles during the 2005 ADCC Submission Wrestling World Championships—submitting all eight of his opponents en route to winning the 88-98kg division—that he emerged as one of the most versatile, aggressive, and consistent grapplers in the world.  The next 5 years Roger would go on to dominate the Jiu Jitsu world winning 9 gold medals in the World Jiu Jitsu Championships.  He has won gold in the -99kg division six times, gold in the +99kg division once as well as silver five times and gold three times in the absolute division. Along the way he also collected a Pan American and European championships to go along with a superfight at the 2007 ADCC tournament.

Overall Roger has a unofficial record of 65-7 in professional Jiu Jitsu matches. Three of his losses have been to Alexandre Ribiero although their overall record is 4-3 in favor of Gracie. Two more of his losses belong to Ronaldo 'Jacare' Souza. They have a competition record of 3-2 in favor of Gracie. He has defeated superb opponents such as Shinya Aoki, Jon Olav Einemo, Robert Drysdale and Fabricio Werdum in his grappling career.

Gracie made his MMA debut in 2006, defeating veteran Ron Waterman by Armbar in the first round of their BodogFight: USA vs. Russia bout. In his second contest, which took place almost two years later, Gracie submitted Yuki Kondo, a famous Japanese fighter, with a Rear Naked Choke in the first round. After a year year hiatus from MMA Gracie made his United States MMA debut in May of 2010, submitting former UFC Heavyweight Champion, Kevin Randleman, in the second round with a Rear Naked Choke.  The next year, Roger would see himself face another MMA veteran in Trevor Prangley at Strikeforce: Diaz vs Cyborg who he was able to submit in the first round with his 3rd straight rear naked choke win.

The 2 wins saw Gracie get a step up in competition in former Strikeforce champion Mo Lawal.  As most grapplers face in MMA many people questioned Gracie's striking, most notably his striking defense and against Lawal it proved a problem as he was knocked out late in the first round.  This first career MMA lose pushed Roger to make the move to the Middleweight division. His first fight there would be against Keith Jardine. The durable Jardine forced Gracie to fight to his first decision but in the end, Gracie got back on the winning track winning an unanimous Decision.

He took on Anthony Smith at Strikeforce's last event and despite a slow start, he was able to finish the fight by arm triangle for the first time in his career. Following the end of Strikeforce, the UFC announced that Gracie would be one of twenty former Skrikeforce fighters coming into the UFC. For his UFC debut, Gracie faced Tim Kennedy at UFC 162. Gracie came out strong in Round 1, but was unable to sink a choke in. In Rounds 2 and 3, Gracie seemed worn out, most likely due to his efforts in Round 1. Kennedy followed up with heavy strikes, but was unable to finish the fight. The judges awarded to fight to Kennedy via unanimous decision. Following the match Gracie's contract with the UFC needed to be renewed, but the UFC did not. Leaving Gracie with a short and lackluster UFC stint.

In August, 2014, Gracie signed a mult-fight deal with ONE FC. He is set to face James McSweeney at ONE FC 23: Warrior's Way, on 5 December. Gracie will be returning to his former weight class of Light-Heavy Weight for this bout.

A highlight video of Roger Gracie focusing on his BJJ accomplishments.