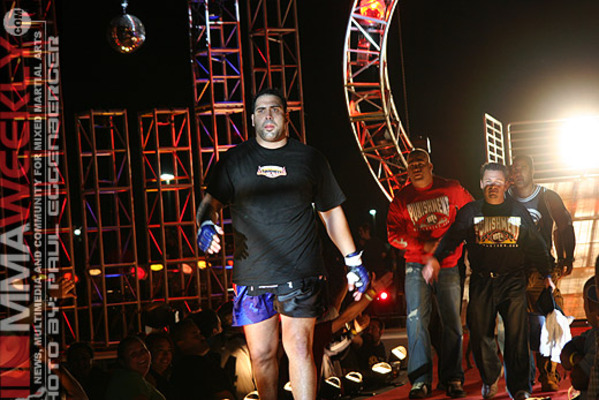 Ricco Rodriguez is ineligible for regional rankings due to inactivity.
Fighters must have at least one completed MMA bout in the past two years to be ranked.

Ricco Rodriguez was once one of the most promising fighters in the heavyweight division, having defeated Andrei Arlovski and Randy Couture en route to winning the UFC Heavyweight Championship in 2002. Unfortunately, Rodriguez lost three straight bouts in the UFC and Pride and was never invited back to either promotion, although he continues to fight in regional shows to this day. Boasting a record with more 50 professional fights, Rodriguez is one of the most experienced heavyweights in the sport, with an extremely accomplished submission game, but he has not defeated a top ten heavyweight in almost a decade.

In addition to his career in the cage, Rodriguez is known for his alleged battles with substance abuse, including cocaine, which lead to his being suspended in 2006 by the California State Athletic Commission. He also appeared on Celebrity Rehab with Dr. Drew.

Rodriguez has also enjoyed a very successful submission grappling career, most notably winning Gold in the 99kg division at the Inaugural ADCC Submission Wrestling World Championship in 1998, followed by bronze in the absolute division in 1999 & Silver at the 2000 ADCC Championships. He holds a 3rd Degree Black Belt in Brazilian Jiu-Jitsu