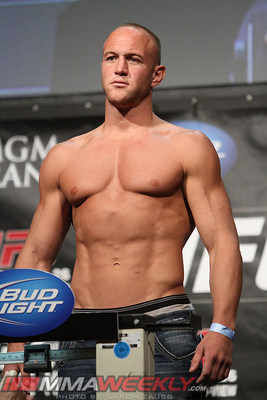 Dave Herman is ineligible for regional rankings due to inactivity.
Fighters must have at least one completed MMA bout in the past two years to be ranked.

Dave Herman began his MMA career in 2006 and in just under a year ran his record to 11-0 with 11 first round stoppages (7 (T)KOs 4 submissions). Herman eventually had his record at 15-0 before suffering his first loss to Choi Mu-Bae in Janurary 2009. Dave then won his next three fights including a 1st round KO of MMA legend Don Frye at Shark Fights 6. At 18-1 Herman then fought Rameau Thierry Sokoudju getting disqualified for illegal knees and losing his second fight. After winning his next fight at Bellator 31 against Michal Kita with a 1st round omoplata, Herman then went to decision for the first time in his career against Yoshihiro Nakao. Herman then made his UFC debut at UFC 131 against fellow newcomer Jon Olav Einemo winning a Fight of the Night bonus with his second round stoppage. Herman has since lost his last two fights in the Octagon first against Stefan Struve and the against Roy Nelson while filling in for an injured Gabrial Gonzaga. In 25 professional fights Herman has managed to go to decision only once and has 18 first round finishes.

Herman next faced Antonio Rodrigo Nogueira at UFC 153 in Rio de Janeiro, Brazil. In the second round, Herman tapped to an armbar, giving him the first submission loss of his career.