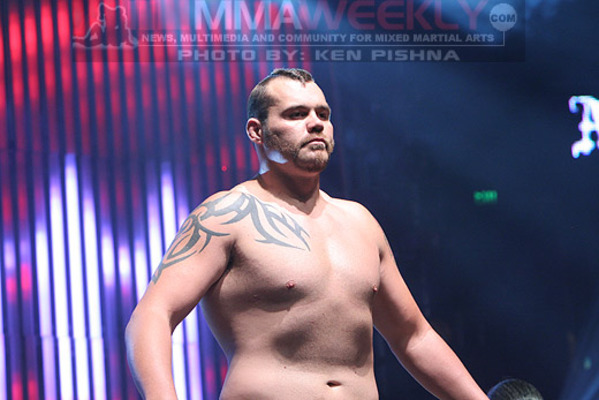 Tim Sylvia is ineligible for regional rankings due to inactivity.
Fighters must have at least one completed MMA bout in the past two years to be ranked.

While most MMA fighters work their way to the top only after years of yoeman's work in the trenches, Tim Sylvia started his professional fighting career off the right way, winning his first 16 fights and taking the UFC Heavyweight Championship after emerging from Bettendorf, Iowa's Miletich Fighting Systems camp. Standing 6’8” and weighing in at the heavyweight limit of 265 lbs. for the majority of his professional appearances, for the first several years of his career “The Mainiac” used his size and reach to pepper foes with crisp boxing from a distance before going in for the kill midway into the fight.

After knocking out Ricco Rodriguez in 2003 to win the heavyweight title, Sylvia would defend the belt one time before relinquishing it to Frank Mir in 2004 in a bout in which Mir broke his arm with an Armbar in the first round. Sylvia’s most notable winning streak came in 2006, when he defeated former UFC Heavyweight Champion Andrei Arlovski (twice), Assuerio Silva, and Jeff Monson en route to winning the title for the second time in his career. Sylvia would lose the belt to UFC Hall of Famer Randy Couture in 2007 and has yet to put together another meaningful winning streak since his departure from the UFC in 2008.

After competing in karate and wrestling during high school, Sylvia would largely rely on his incredible size and striking ability during the majority of his professional career. Sylvia is generally considered a knockout fighter, having won more than 50% of his professional fights by way of strikes. However, “The Mainiac” does possess solid groundfighting and submission ability, having skillfully stifled world-class grappler Jeff Monson on the ground in the course of a UFC title defense.