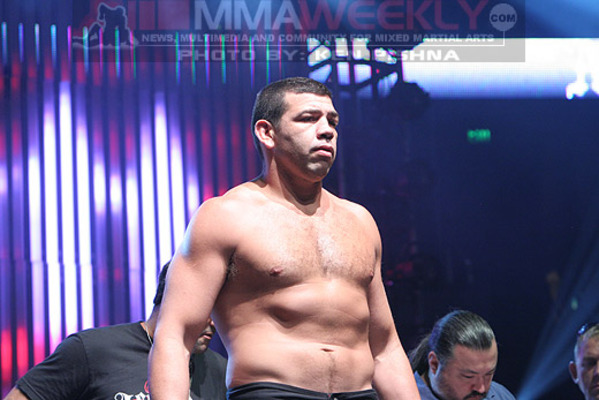 #67
Greatest MMA Striker of All Time

Pedro Rizzo is ineligible for regional rankings due to inactivity.
Fighters must have at least one completed MMA bout in the past two years to be ranked.

A Brazilian Vale Tudo fighter to the core, Pedro Rizzo earned his nickname, “The Rock,” due to his iron chin and powerful strikes. Rizzo debuted for the UFC in 1998 with a perfect 5 - 0 record and promptly defeated Tank Abbott, Mark Coleman, Tra Telligman, and Tsuyoshi Kohsaka en route to challenging for the heavyweight title in 2000. Rizzo lost that fight to Kevin Randleman, and went on to lose both of his subsequent attempts at gaining the belt against Randy Couture, but he remains one of the most respected heavyweight legends of the sport.

Rizzo has knocked out top heavyweights such as Dan Severn, Andrei Arlovski, and Jeff Monson during his career. He also possesses a knockout win over Josh Barnett, a feat which is very hard to accomplish. Known as much for his punishing leg kicks as for his punches, in multiple interviews UFC Hall of Famer Randy Couture said that he still bears a knot in his quadriceps from one of his battles with Rizzo from 2001.

While known mostly as a stand up fighter, Rizzo has a Black Belt in Brazilian Jiu-Jitsu as well as a 4th Degree Black Belt in Luta Livre & Black Prajied in Muay Thai. He is a former 4 time Brazilian national Muay Thai champion, with a Kickboxing/Muay Thai record of 31 -  2 - 1.

He began training at 14 under Marcos Ruas, becoming a valued apprentice of his Vale Tudo style. Adding to this, he took multiple trips over the years to train at the renowned "Chakuriki Dojo" in Holland, and also debuted under MMA rules for the first time in that country.

Since his competitive career has wound down, Rizzo has started doing seminars, and mentoring fighters from stables including 'Team Nogueira' and 'Nova Uniao. He has worked extensivley with former WEC/UFC Champion José Aldo, who has fought with a similar style to his own. Aldo has stated previously, that he has taken great inspiration from watching both Rizzo and Marcos Ruas fights growing up. Top heavyweight-kickboxing contender and MMA prospect, Anderson "Braddock" Silva - is another notable fighter who Rizzo has mentored and helped to train for his fights.

Pedro Rizzo now runs his own gym, "Rizzo RVT Fight and Fitness" in Rio De Janeiro. He was also appointed as administrative CEO of the "Usina De Campeões / Martial Arts Social Project of the Manguinhos Refinery", which is a social project aimed at helping some of Brazil's many impoverished people and kids - to seek a better life-experience, wellbeing and future - through combat sports.