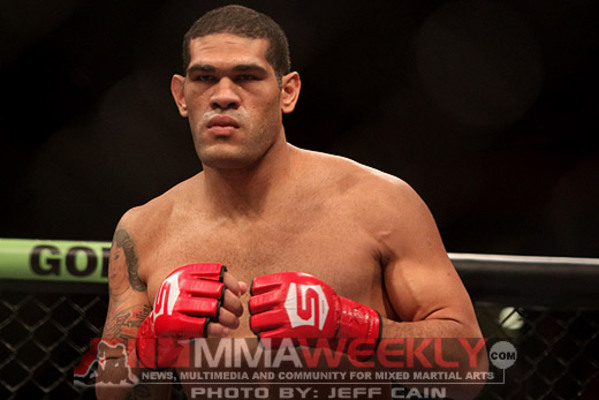 Currently fighting out of the famed American Top Team Academy in Coconut Creek, Florida, Antonio “Junior” Silva (aka "Bigfoot" Silva) has trained previously with Wolfslair and BTT.  Silva made his professional MMA debut in 2005 and promptly ran his record to a stellar 7-0—all first-round finishes—before finally being defeated by Eric Pele in 2006. Following the loss to Pele, Silva signed with the now-defunct EliteXC promotion winning four fights (including victories over Wesley Correira, Ricco Rodriguez and Justin Eilers) en route to taking the first and only EliteXC Heavyweight Championship.  However, Silva tested positive for Boldenone after the fights, and was suspended for one year.

The gargantuan Silva used to be forced to fight at super heavyweight, unable to make the 265 lb. weight limit, but has since slimmed down to within the heavyweight weight class. Silva wins bouts through a combination of crisp, technical boxing unusual for a man his size, solid Muay Thai knee strikes from the clinch and elsewhere, and a Jiu-Jitsu base that makes him dangerous to take down.

In 2009, Silva lost to Fabricio Werdum, in his Strikeforce debut. He would then decision former UFC Heavyweight Champion Andrei Arlovski, and then knockout Mike Kyle. Silva then got the biggest win of his career when he defeated former PRIDE FC Heavyweight Champion Fedor Emelianenko in 2011. The conclusion of the fight came when Emelianenko's eye was deemed unfit to continue before the third round, giving Silva a second round TKO. Emelianenko had previously lost for the first time in ten years to Werdum, but this was still considered an impressive upset.

After losing a bout with eventual Strikeforce champion Daniel Cormier, Bigfoot took his services over to the UFC.  Silva made his UFC debut at UFC 146 against former UFC Heavyweight Champion Cain Velasquez. The fight did not go as planned for Bigfoot, as he was finished in the first round.  Antonio Silva faced Travis "Happa" Browne at UFC on FX 5, Bigfoot got his first UFC victory via TKO in the first round. Shortly after, Silva was booked to fight Alistair Overeem. Going into the bout, most of the talk about the fight was how Overeem would go on to challenge for the championship next. The fight took place at UFC 156 on February 2, 2013. Silva was able to pull off the upset defeating Overeem in the third round with an impressive Knockout of the Night victory. A Key to the bout was that Overeem was overconfident and lazy on defense. The "Demolition Man" had a great first round, but would strike and then stand right in front of Silva. Overeem was outstriking "Bigfoot" until ducking into an uppercut, without his hands protecting his face.

Silva would fare better in his next outing against an accomplished and powerful striker Mark Hunt with whom he engaged in a 5-round war at UFC Fight Night 33 in December of 2013. The heavyweight slugfest involved both competitors gaining the upper hand only for the pendulum to swing the other way before it finally ended in a Majority Draw which in a very rare occurrence, was a satisfying outcome. The fight has gained a wide acclaim and both participants have received the Fight of The Night honors, but it was proved to be somewhat bittersweet when Silva failed the post fight test for elevated testosterone levels and not only has been suspended for the next 9 months, but has also lost the award money and the "draw" on his record, which has been turned into a No Contest (Hunt has retained the draw on his).
After the suspension, BigFoot made his first fight ever in Brazil in a rematch agains Andrei Arlovski. Silva loss by a first round knockout due to a hook and a heavy ground and pound.
Now, he will face the former UFC Heavyweight champion Frank Mir on UFC 184 in February 28th