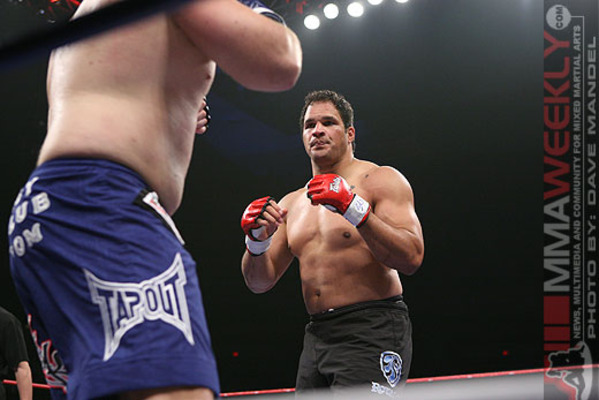 Mark Kerr is ineligible for regional rankings due to inactivity.
Fighters must have at least one completed MMA bout in the past two years to be ranked.

Known variously as “The Smashing Machine,” “The Titan” and “The Specimen,” Mark Kerr has known the highest and the lowest that professional mixed martial arts competition has to offer. In his peak years from 1997 through 2000, Kerr was an unstoppable fighting colossus, utilizing an Atlas-like physique, freakish strength and a decorated amateur wrestling pedigree to become an unbeaten UFC and Pride champion. Kerr’s early style was distinctive in his ability to combine a straightforward takedown and ground-and-pound wrestler’s attack with a proclivity for submissions that was, and remains, rare in a heavyweight.

Kerr’s renown stemmed not only from his extraordinary physical attributes but from his articulate and thoughtful manner, qualities not always displayed in combatants from MMA’s rough-and-tumble early years. However, as demonstrated in the well-known HBO documentary “The Smashing Machine” which bears his nickname, the introduction of losses into Kerr’s fight record in 2000 coincided with a precipitous personal decline into purported steroid usage, painkiller abuse and weight gain that effectively ended his career among MMA’s upper echelons. Kerr still fights from time to time today, but is largely remembered as a tragic and cautionary figure who soared to MMA stardom on his physical gifts, only to lose it all to his personal demons.

Tap or Sleep produced this Mark Kerr perspective piece looking back over the career of "The Smashing Machine."