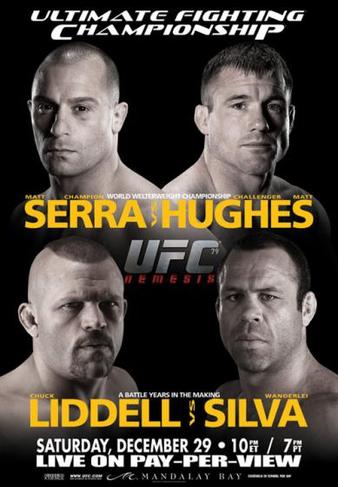 Billed under the ominous title of “Nemesis,” UFC 79 featured two of the most anticipated fights of the year when former UFC Light Heavyweight Champion Chuck Liddell took on former Pride Middleweight Champion Wanderlei Silva, and former UFC Welterweight Champions Matt Hughes and Georges St-Pierre met in a rubber match to determine the next contender to Matt Serra’s title.

In a bout that was long overdue, Liddell and Silva delivered a savage contest for the fans, with Liddell getting the nod by Unanimous Decision. St-Pierre went up 2-1 over Hughes by finishing the Hall of Famer with an Armbar in the second round.

Serra was originally scheduled to defend his title against fellow TUF 6 coach Hughes, but was forced off of the card due to a back injury suffered in training. For his win, St-Pierre was awarded the Interim Welterweight Championship, but in his post-fight comments, he called Serra’s title the “real belt,” and expressed his desire to avenge his second career defeat.