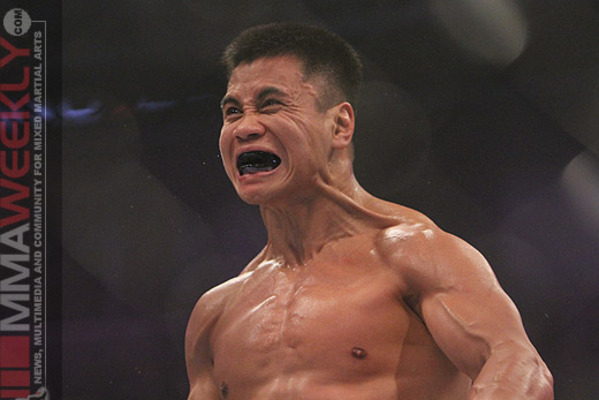 #35
Greatest MMA Striker of All Time

Cung Le is ineligible for regional rankings due to inactivity.
Fighters must have at least one completed MMA bout in the past two years to be ranked.

Cung Le was born in south Vietnam. He and his mother narrowly escaped the Fall of Saigon, leaving in a helicopter through an array of gun fighting. Le found his way to California, and was subject to bullying and discrimination, prompting him to study martial arts. His mother enrolled him in a Tae Kwon Do school, but Cung would study a variety of systems throughout his life. Cung also wrestled in high school, earning All-American honors in his Junior year. Le continued his wrestling career with West Valley College where he won a Junior College State Championship.

While he has devoted more time in recent years to a budding Hollywood film career than his fighting career, former Strikeforce Middleweight Champion Cung Le is an accomplished martial artist possessing some of the most impressive kicks in the business. Before transitioning into professional MMA competition, Le was a decorated Sanshou (Chinese Kickboxing) champion, going undefeated in 16 professional fights and winning multiple titles, including three US Open International Martial Arts Championships, the 1998 Shidokan Championship, and 4 US National Championships.  Cung also squared off against world renowned fighter Shonie Carter in 2001, winning by unanimous decision and earning the IKF pro light-heavyweight championship.  Cung also competed in K-1, winning all three of his bouts in decisive fashion.

Following his kickboxing career, Le entered the world of professional MMA, winning his first six fights—including one over MMA legend Frank Shamrock—by knockout or TKO before suffering the first defeat of his career in an exciting upset loss to Scott Smith in December of 2009. Le got revenge on Smith in their very next fight, finishing the rematch inside the distance.

Although Le is known mainly for his fast, unusual, and vicious kicking combinations, which he used to great effect through his extended unbeaten streak in MMA, he is also well-versed in the art of off-balancing opponents, often sweeping them completely off of their feet and onto the mat with forceful and damaging hip tosses. Many fans wonder how Le would fare in a fight with an experienced grappler, but such a bout has yet to be put together. In the meantime, Le continues to impress with his dominance in the stand-up arena.

Le was signed to the UFC but would lose his debut by TKO to Wanderlei Silva in the second round, the silver-lining for the loss was that he did earn Fight of the Night honors. He would face Patrick Cote in his next bout and get his first UFC win with a Unanimous Decision victory. He faced former UFC middleweight champion Rich Franklin in the main event of UFC on FUEL 6 in Macau, the UFC's first event in China, where he caught Franklin with a leading right hook 2 minutes and 14 seconds into the fight. The flash knockout and surprising upset earned Le "Knockout of the Night" honors, his second post-fight bonus in his UFC career. He would drop his next match to Michael Bisping in the Main Event of UFC Fight Night 48 when he was TKO'd in the 4th round.