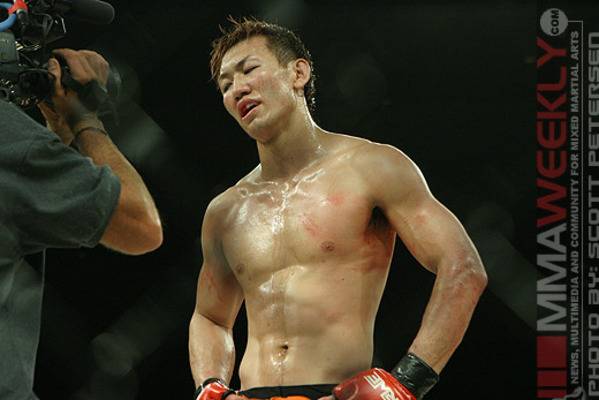 Fighting for a major organization has made Yushin Okami ineligible for regional rankings.

A highlight video of Yushin "Thunder" Okami's early days in MMA. Part 2 of 2.

Yushin Okami began fighting professionally in 2002 and ran his record to 16-3 prior to his UFC debut in 2006. After joining the U.S.-based promotion, Okami won four straight fights, including bouts with Alan Belcher and Mike Swick, before losing his first UFC fight to former Middleweight Champion Rich “Ace” Franklin. Since the loss to Franklin, Okami has returned to his previous form, defeating the likes of Jason MacDonald, Evan Tanner, and Dean Lister and—excluding a loss to Chael Sonnen—reestablishing himself as a contender in the middleweight division.

What makes Okami unique among Japanese mixed martial arts fighters is his wrestling-based fighting style. He utilizes his vaunted physical strength and grappling ability to control opponents on the ground and inflict damage with ground and pound attacks. Okami at one point had become known for dragging fights to decisions, but his impressive knockout of Evan Tanner via a knee strike helped silence that criticism.

Okami has fought a who's who list of opponents. His most notable win came against Anderson Silva at Rumble on the Rock in 2006. This win came by disqualification due to illegal upkick from Silva. Silva later avenged this loss by dispatching Okami in a UFC title fight in 2011. He primarily trains in Japan but has spent time training at Team Quest in Portland, Oregon. After his loss to Chael Sonnen, he asked if he could train with him. Since then, he has trained periodically there including leading up to his his latest bout with Anderson Silva.

Since his most recent title shot, Okami has had mixed results. He was knocked out in an upset by Tim Boetsch after having dominated the first two rounds of the fight. He would get back to his winning ways with a knockout over Buddy Roberts and a grueling decision victory over Alan Belcher at UFC 155 to push him closer to contender status. Okami's would then square off against Hector Lombard at UFC on Fuel TV 8 in Saitama, Japan a fight that he would control and win a Split Decision victory. Following the win over Lombard, Okami suffered a devastating first-round knockout loss to Ronaldo "Jacare" Souza in Brazil.

Following the loss to "Jacare" and after a seven-year career with the world's top MMA promotion, Okami was released by the UFC. Just two years earlier, UFC President Dana White had declared Okami "the best fighter to ever come out of Japan."

Following the release Okami would sign on with the World Series of Fighting and would make a successful debut at WSOF 9. He would dominate the first and finish Svetoslav Savov in the second round with an arm triangle choke.

Okami is set to face World Series of Fighting Middleweight Champion David Branch on WSOF 15 on November 15th at the Sun Dome in Tampa.