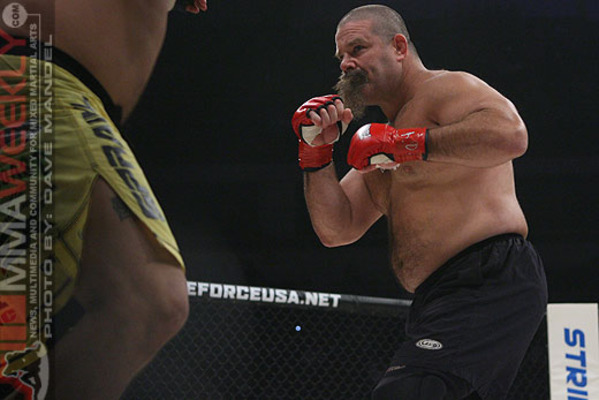 David Abbott is ineligible for regional rankings due to inactivity.
Fighters must have at least one completed MMA bout in the past two years to be ranked.

Legendary pit brawler David “Tank” Abbott was in many respects the poster boy for MMA’s wild, unregulated early years. Describing his style as “street fighting” (most would say accurately), the colorful Abbott made his professional debut at UFC 6 in July 1995 and, with a highlight-worthy 18-second KO win, quickly became one of the promotion’s biggest stars. Abbott sported the appearance and demeanor of a west-coast biker and claimed to prepare for his bouts with a combination of power lifting (video on YouTube shows Abbott bench-pressing 600 pounds), heavy bag work, and drinking.

Abbott was the first person to get suspended by the UFC for fighting outside of the event.  At UFC 8 in Puerto Rico, he got into a fight with some BJJ fighters while he was watching the event.Tank was not allowed to return to action until UFC 10.

Despite bearing virtually no resemblance to the disciplined and well-rounded modern day MMA fighter, Abbott is nevertheless responsible for some of the sport’s most stunning knockouts. A man of obvious and extraordinary power, a punch landed by “Tank” Abbott could – and often would – leave opponents stiffened up in unconciousness while Abbott jeered at or otherwise ridiculed them. Though he never demonstrated great proficiency in submission grappling, Abbott possessed more than just a heavy right hand. He is a former wrestler with excellent balance and base, and like future star Roy “Big Country” Nelson, Abbott carried his extra weight well, using his prominent belly to help stifle and control his opponents. Though the frequency of losses later in his career leaves David Abbott’s continuing viability in the sport in doubt, he is part of its permanent tapestry and it is safe to say there will not be another MMA fighter quite like him.