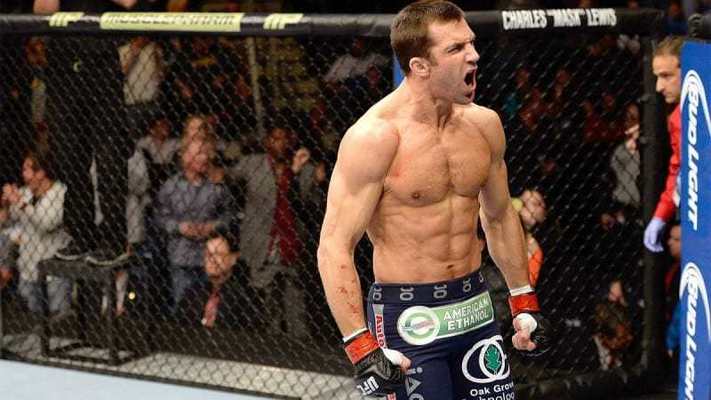 Luke Rockhold is ineligible for regional rankings due to inactivity.
Fighters must have at least one completed MMA bout in the past two years to be ranked.

Rockhold made his profession mma debut on July 24th, 2007 in a winning effort via submission at 2:44 of the first round against Mike Martinez. Despite a loss in his second bout against Tony Rubalcava, he was signed to Strikeforce. After a string of 6 consecutive first round finishes, at 7-1, Rockhold found himself challenging Ronaldo "Jacare" Souza for the Strikeforce Middleweight Championship at Strikeforce: Barnett vs. Kharitonov. In a competitive five round fight, Rockhold came away with the unanimous decision victory and with it, the title.

Rockhold had his first title defense against UFC veteran Keith Jardine at Strikeforce: Rockhold vs. Jardine. At 4:26 of the first round, Rockhold defeated Jardine via TKO. His next defense came against Tim Kennedy. At Strikeforce: Rockhold vs. Kennedy, Rockhold won a unanimous decision to mark the second consecutive successful defense of the middleweight championship. Rockhold is the only person in Strikeforce history to defend the middleweight title multiple times successfully.

Rockhold's third defense had been expected to take place on the November 3rd, 2012 Strikeforce event against the undefeated Lorenz Larkin. In early October, however, Rockhold withdrew from the bout due to a wrist injury.

Since the Strikeforce promotion ended Rockhold has been named as one of the fighters who will receive a contract with the UFC. Luke has already been asking to get matched up against Costa Philippou in his first bout, however he will be facing off against Vitor Belfort at UFC on FX 8. In the main event of the card Rockhold would fall short getting finished by TKO in the first round by Belfort. Rockhold would once again be in the main event in his next fight this time at UFC Fight Night 35 as he looked to pick up his first win in the octagon against Costa Philippou. He would do just that finishing Costa in the very first round with a couple kicks to the body to earn his first UFC victory as well as the Knockout of the Night bonus.

Rockhold scored another 1st round finish in his next fight against Tim Boetsch this time with a crowd pleasing submission. Luke is now set to square off against  fellow highly ranked middleweight Michael "The Count" Bisping on November 7th, 2014.