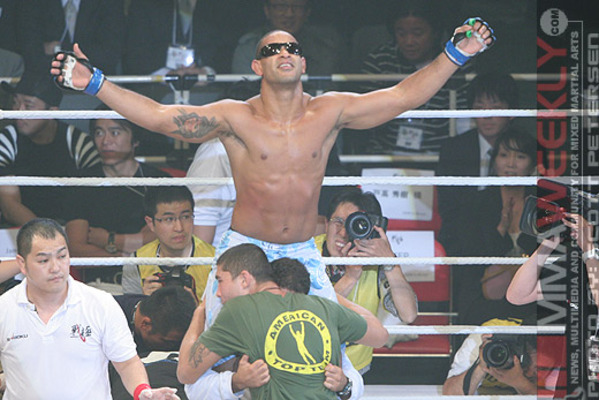 Jorge Santiago is ineligible for regional rankings due to inactivity.
Fighters must have at least one completed MMA bout in the past two years to be ranked.

Santiago is a BJJ blackbelt. He has fought most of his career at Middleweight but dropped to Welterweight in his last fight. He is known as a danger on the ground and has power in his hands but he seems to have a highly questionable chin. 23 of his 25 wins have been finishes, 13 by submission and 10 by way of T/KO.

After starting his career 11-5, Santiago was signed to the UFC in 2006. Santiago looked impressive in his debut, dispatching Justin Levens in 2 minutes. He would then be finished in his next two fights against Chris Leben and prospect Alan Belcher. This would lead to "The Sandman" being cut by the organization.

After being cut from the UFC Santiago went on a 11-1 tear with his lone loss coming by KO against Mamed Khalidov whom he beat in an immediate rematch. Perhaps his most impressive win was his second fight with Kazuo Misaki which is considered by many to be the best fight of 2010 and one of the best ever. Most of these wins came in the Sengoku promotion where Santiago won the Middleweight Grand Prix and became the first Middleweight champion.

After Santiago's win over Misaki he re-signed with the UFC. He was welcomed back by hard hitting Brian Stann. Santiago would lose the fight by KO in the 2nd round. Next Santiago would fight BJJ ace Demian Maia. Most of the fight took place with Maia on top of Santiago. Santiago landed some good shots on the feet and had some nice sweeps but Demian's takedowns wore him down and eventually gave Maia the decision victory. Afterwards Santiago was again cut by the UFC.

Santiago went and got 2 quick wins in Titan FC, and was yet again called upon by the UFC. This time he would be making his debut at welterweight on short notice against top prospect and world class jiu jitsu talent Gunnar Nelson. Santiago came out aggressive but Gunnar proved to be too much as he won the decision. Santiago was cut from the UFC following the loss.