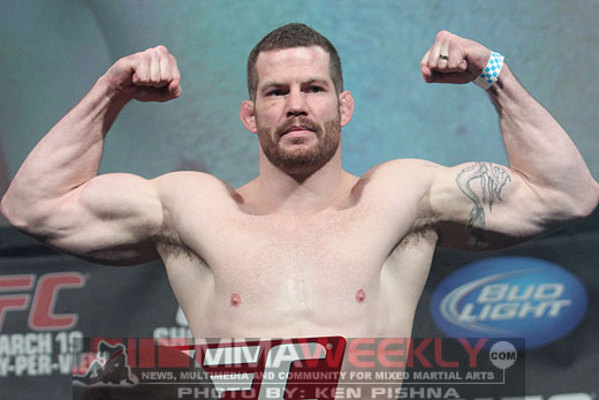 Nate Marquardt is ineligible for regional rankings due to inactivity.
Fighters must have at least one completed MMA bout in the past two years to be ranked.

Nate Marquardt is a veteran of many top tier MMA promotions including Pancrase, the UFC, and Strikeforce. He has fought a who's who list of fighters throughout his extensive career that has included Anderson Silva, Genki Sudo, Yves Edwards, Shonie Carter, Ricardo Almeida, Joe Doerksen, Dean Lister, Jeremy Horn, and Demian Maia. Shane Carwin is among his notable students at his gym, High Altitude Martial Arts in Aurora, Colorado. He is married with two children. He had a small role in the 2011 movie "Warrior" as a fighter named Karl "The Dane" Kruller.

He won the fourth Bas Rutten Lightweight invitational tournament. He has also held titles in Rumble in the Rockies, Ring of Fire and the World Vale Tudo Federation. He has held seven Pancrase titles including being the first and three time Middleweight King of Pancrase. He currently holds the Steikeforce Welterweight championship. He also has black belts in four different martial arts including Brazillian Jiu-Jitsu (2nd degree), Pancrase Pankration (2nd degree), Jujutsu (2nd degree) and Gaidojutsu making him one of the most accomplished Mixed Martial Artists on paper. He has two "of the night" bonuses under the Zuffa banner.

Marquardt had his first major success when he won the lightweight tournament at Bas Rutten's Invitational 4 in 1999. He notably beat Yves Edwards in the first round of the tournament by heel hook. He did not receive the customary UFC contract that was associated with winning that tournament so he instead signed with the Japanese promotion, Pancrase. He would suffer his first professional loss against Genki Sudo in his Pancrase debut.

He would get back to his winning ways by winning the Ring of Fire Middleweight championship in 2000. He would next get three wins in four months in Pancrase to win the inaugural Middleweight King of Pancrase crown in late 2000. He would defend the title in a draw with Kiuma Kunioku and later lose it to him after several successful title defenses in 2001. He would regain the title from the same man in 2002 by earning the first finish in their three fights by either man.

After several more sucessful title defenses, Marquardt would again lose the title. This time, it was to Ricardo Almeida in a controversial fight. Almeida won the fight by tap out due to guillotine choke, but he did not release the submission immediately after Marquardt tapped out. After it was released, Nate threw a strike to Almeida's head. This caused both corners to enter the ring. Renzo Gracie was in Almeida's corner and when he got in the ring, he kicked Nate in the head. The altercation was eventually broken up and Marquardt congratulated Almeida.

Marquardt would again regain the Middleweight King of Pancrase by defeating Izuru Takeuchi in 2005. This would mark the seventh and final Pancrase title he would earn. No other fighter has ever held so many titles for the promotion. After 21 fights for Pancrase over five and a half years, he had amassed a record of 13-6-2.

In August, 2005, Marquardt made his debut in he UFC by beating Ivan Salaverry by unanimous decision. After this fight, he tested positive for nandrolone, an anabolic steroid. He claimed to have only taken over the counter supplements but was suspended nonetheless. After a five month suspension, he went on to win his next three fights, two by decision, thus earning a title shot in the summer of 2007. In a typical Anderson Silva fight, Marquardt was dispatched in the first round due to strikes.

He would bounce back with an impressive standing guillotine choke win over grappling legend, Jeremy Horn. His next fight would be a controversial loss to Thales Leites. Although the fight was close throughout, Marquardt was twice docked a point for an illegal knee to the head and illegal elbows to the side of the head. The lost points wound up being the deciding factor in a decision loss.

He went on to win another three fights in a row, this time all by t/ko. This streak saw perhaps the most impressive victory of his career when in 2009, he became the first fighter to defeat Demian Maia when he knocked the Jiu-Jitsu ace out cold just 21 seconds into the first round. He looked poised to get another title shot but ended up losing an upset decision to Chael Sonnen in early 2010.


Marquardt would go on to win two of his next three outings. His sole loss would come in yet another title elimination fight against Yushin Okami. He decided to drop to Welterweight at the urging of his teammate, Georges "Rush" St. Pierre. He was supposed to make his debut in the main event of UFC on Versus 4 against Rick Story. Prior to the fight, Marquardt had been undergoing Testosterone Replacement Therapy due to low testosterone levels. At a prefight medical screen, his testosterone levels were found to be too high and he was disallowed to fight. On the day the fight was supposed to happen, he passed screening, thus avoiding a suspension. After being pulled from the fight, he was cut from the UFC.

He signed a contract with BAMMA, but was eventually released for an undisclosed reason though it was reported that the promotion was unable to pay his contract.  On July 14th, 2012, Marquardt made his Strikeforce debut at welterweight. He faced off against undefeated prospect Tyron Woodley for the vacant Strikeforce Welterweight Championship. In a very thrilling fight, Marquardt handed Woodley his first professional loss, a KO at 1:39 into the 4th round, to claim the welterweight crown. He was set to defend his title against Tarec Saffiedine at the promotion's last event. In a disappointing fight, Tarec was able to control much of the fight and pepper Nate with leg kicks to the point where his legs were visibly swollen and discolored. Marquardt would lose his title by decision.Despite the loss it looks like Marquardt will still receive a contract with the UFC following the closing of Strikeforce.

Marquardt would then to face Jake Ellenberger at UFC 158. However it was not a good homecoming to the UFC for Marquardt as he was finished by TKO in the very first round. Marquardt would lose his second straight fight by TKO when he was finished by Hector Lombard at UFC 166. Looking to get his first win in the UFC since 2011, he faced James Te Huna in the Main Event of UFC Fight Night 43 and would go on to submit Te-Huna via arm bar in the 1st round.
Finding career resurgence returning to middleweight, Marquardt would be slated to face top prospect, Brad Tavares. The fight is scheduled to take place at UFC 182.