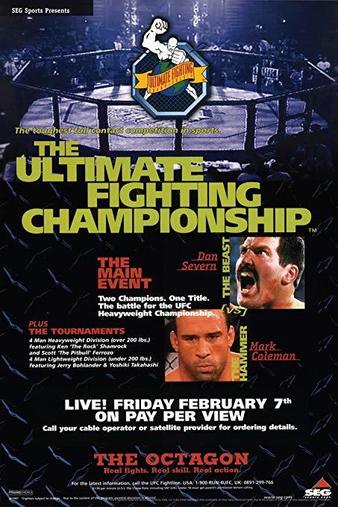 UFC 12 was the first UFC event of 1997. Due to mounting efforts by Senator John McCain and other opponents of the sport, the UFC found it extremely difficult to find a venue to host UFC 12, finally deciding on the Dothan Civic Center in the small city of Dothan, Alabama.

UFC 12 marked the promotion's introduction of official weight classes, as competitors were split into two weight categories, heavyweight (200 lbs. and over) and lightweight (199 lbs. and under). The two weight classes competed in two separate tournaments. Jerry Bohlander won the Lightweight Tournament, Vitor Belfort won the Heavyweight Tournament in his debut for the promotion, and Mark Coleman won the first-ever UFC Heavyweight Championship by defeating Dan Severn.