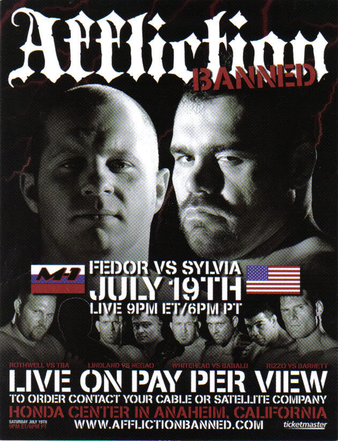 After growing into one of the largest and most recognizable MMA-themed clothing brands in the world, Affliction Clothing branched off through newly organized Affliction Entertainment to found its own MMA league. In the organization’s inaugural event, Affliction: Banned in July of 2008, heavyweight kingpin Fedor Emelianenko earned his most significant victory in years by submitting former UFC Heavyweight Champion Tim Sylvia in the first round.

Affliction’s debut show made a big impression on hardcore MMA fans by securing the talents of many of the top heavyweights in the world, including Andrei Arlovski and Josh Barnett. Unfortunately for those fans, Affliction Entertainment’s profligate spending on those fighters and associated costs of diving into the deep end of MMA fight promotion, spelled a short-lived business venture. Affliction would ultimately host only one more MMA event. Its third event was cancelled and the promotion shuttered.

MMA video maker Machinemen gives us this look back at the best fighting moments from Affliction: Banned.