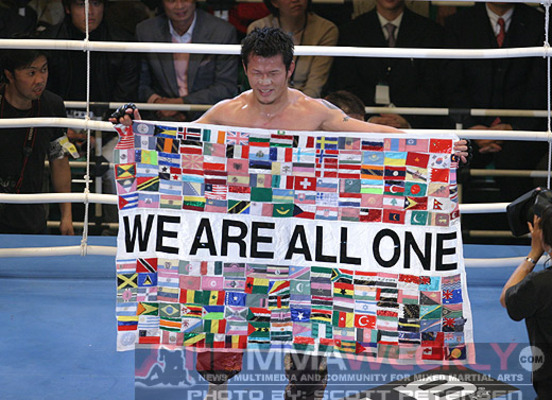 Genki Sudo is ineligible for regional rankings due to inactivity.
Fighters must have at least one completed MMA bout in the past two years to be ranked.

Genki "Neo Samurai" Sudo was born on Tokyo, Japan and had his first taste of the combat sports, like so many others, through high school Greco-Roman wrestling.  After high school, Sudo attended college where he  won the JOC Cup All Japan Junior Wrestling Championship.  After college, Sudo moved to California, where he joined the Beverly Hills Jiu-Jitsu Club, thus beginning his MMA career.

Truly one of the performative bright spots in the history of mixed martial arts, Japanese sensation Genki Sudo was one of the most respected and well-known fighters of the early 21st century. In addition to holding career victories over standouts Nate Marquardt, Mike Thomas Brown, and Royler Gracie, Sudo was respected for his peaceful, “We are all one” philosophy of mixed martial arts competition. Before retiring in 2006, Sudo was one of the biggest stars in the famous K-1 promotion and was only finished in one professional fight throughout the entirety of his career.

Like many of his Japanese counterparts, Sudo was predominantly a savvy submission specialist, having won 75% of his professional fights by way of submission.

Genki Sudo has since retired from professional fighting.  He also has a career as a musician, artist, and actor.  Sudo is a practicing Buddhist, and is well known for his "We Are All One" philosophy, commonly flying a blue NATO flag with the words written across the front of it.

A highlight video of Genki Sudo's most creative ring entrances and walk-ins.

Brian Del Rosario is 32 today! Send him a Tweet.