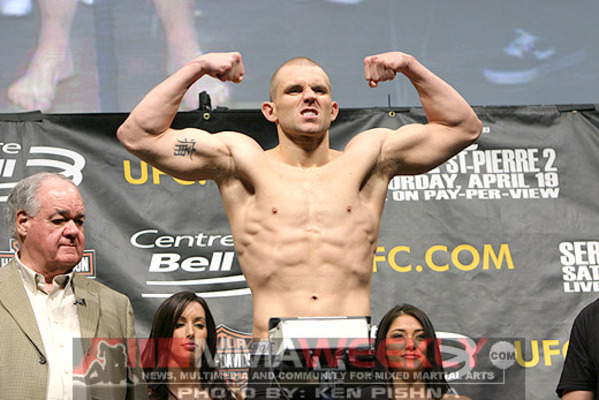 Alan Belcher is ineligible for regional rankings due to inactivity.
Fighters must have at least one completed MMA bout in the past two years to be ranked.

Alan Belcher made his professional MMA debut in 2004. He ran his record to 9-2 before being invited to join the UFC’s middleweight division in 2006, where he was defeated in his Octagon debut by Japanese fighter Yushin Okami in a Unanimous Decision. Following the loss, Belcher defeated Jorge Santiago by knockout with a head kick before being submitted by Kendall Grove. In 2008, after alternating wins and losses in the UFC, Belcher began to hit his stride, defeating Ed Herman and Denis Kang before dropping a close Split Decision to Yoshihiro Akiyama in UFC 100’s Fight of the Night. Belcher then defeated respected middleweights Wilson Gouveia and Patrick Cote inside the distance. It was clear the talented young fighter had matured and broken through to a new level in his game.

In addition to high level Muay Thai skill and power honed under the famed Duke Roufus, Belcher has become known recently for his submission game. He has tapped three opponents in the UFC, including Cote and Kang. Belcher also has a knack for winning UFC bonuses, and has gone on the record in recent years about his desire to have the UFC push him as a headlining fighter.

Belcher was set to face Jiu Jitsu ace Demian Maia in September of 2010 however he had to pull out and have emergency eye surgery because he was losing vision in his right eye. This would sideline Belcher for a year but he would return in spectacular fashion with first round finishes of Jason MacDonald and Rousimar Palhares. Alan was scheduled to rematch Yushin Okami to see if he could avenge his first loss in the UFC. In a grinding fight, very similar to their first meeting, Belcher lost a decision. He would follow that up with a Technical Decision loss to Michael Bisping after he was poked in the eye in the third round.

Alan Belcher discusses his career-threatening eye injury and long road back to the UFC.