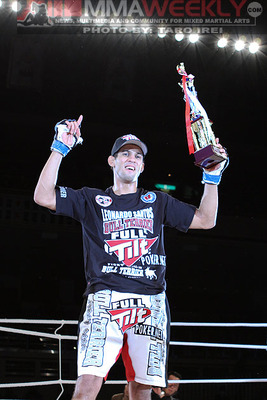 Fighting for a major organization has made Leonardo Santos ineligible for regional rankings.

Leonardo Santos was born in Rio de Janeiro and also has a brother that fights, Wagnney Fabiano.  Santos began training in Brazilian jiu-jitsu when he was 5 years old.  He trained under Wendell Alexander who would join with Andre "Dede" Pederneiras to create Nova União.  Santos made his mixed martial arts debut in Shooto against Taknori Gomi, losing a decision.  He would take some time off from MMA dedicating himself to BJJ again and would win the World Cup Championships 4 times between 2002 and 2005.  Santos would also be the ADCC Brazilian Trial Champion and took 4th place in the ADCC Finals in 2005.

Santos returned to MMA in 2006 amassed an 11-3 record before making the cast of The Ultimate Fighter Brazil 2.  Santos was the fourth pick of  Antônio Rodrigo Nogueira, and made his way to the semi-finals before losing to Santiago Ponzinibbio.  The fight would go on to net both Santos and Ponzinibbio a $25,000 bonus for fight of the season.  However, during that match Ponzinibbio broke his hand and did not recover in time for the live finale at UFC on Fuel TV 10.  Santos was selected as the replacement, and went on to submit the other finalist William Macario to win the season's title of The Ultimate Fighter.