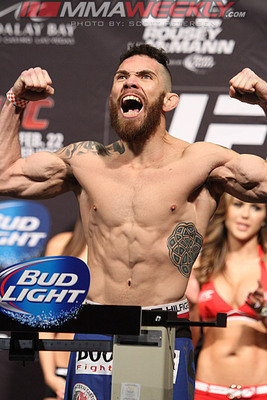 Rafaello Oliveira is ineligible for regional rankings due to inactivity.
Fighters must have at least one completed MMA bout in the past two years to be ranked.

Rafaello Oliveira is a Brazilian lightweight fighter currently signed to the UFC. He is a black belt in Brazilian Jiu Jitsu and trains out of Charleston Krav Maga and MMA in Charleston, South Carolina. He has notable wins over John Gunderson and Yoislandy Izquierdo. Of his sixteen career wins, nine have been finishes including five submissions.

Oliveira began his professional career in 2004 with a second round TKO. His first seven fights would all take place in Brazil over a three year time span and he was able to compile a 6-1 record. He would move to the US in 2008. Over the next fourteen months, he was able to build his record to 10-2 overall by fighting for various promotions in the US and Canada.

In 2009, Oliveira was signed by the UFC. He was supposed to make his promotional debut against Dan Lauzon, but his opponent pulled out with an injury so he instead face Nike Lentz at UFC 103, but would lose by decision. He would bounce back with a unanimous decision win over John Gunderson, but would lose two months later when he faced Andre Winner at UFC Fight Night 21. This put his UFC record at 1-2 and saw him released from the promotion. After his release, he would win four straight fights in six months in both the US and Brazil.

Rafaello would be resigned to the UFC in early 2011. His first test was against Gleison Tibau at UFC 130, but he would be submitted for the first time in his career. He took on Yves Edwards five months later but would lose by TKO in the second round. At UFC 148, he was able to bounce back with a unanimous decision win over Yoislandy Izquierdo. He would take a year off from competition but would return against Edson Barboza at UFC 162 but would lose by TKO due to leg kicks in the second round. This put his overall UFC record at 2-5. He took on Erik Koch at UFC 170, but was finished with strikes early in the first round. This put his overall UFC record at 2-6 with four of his losses being finishes.